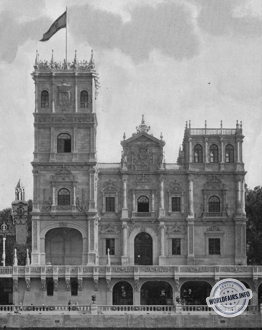 The Royal Pavilion of Spain was in the purest Spanish Renaissance style. The details of its construction had been borrowed from various historical monuments; the façade of the University of Alcala, built by Rodrigo Gil de Ontafion in 1555; the main façade of the Alcázar of Toledo, entrusted to the famous Alfonso de Covarubias by Charles V, when this sovereign transformed the ancient fortress built by Alfonso X into a sumptuous palace; the University of Salamanca, one of the most complete models of the so-called "plateresco" style, which was made known at that time by the attempts of Enrique de Egas in Santa Cruz de Toledo and Santa Cruz de Valladolid; and finally, the palace of the Counts of Monterey (property of the ducal house of Alba), remarkable for its magnificent crowning crest built in 1534.
All these masterpieces from one of the most brilliant periods of the Spanish nation have inspired some of the details or have been exactly reproduced in the construction of the Royal Pavilion.
The building itself, rectangular in shape, was of a dazzling whiteness that contrasted with the violent colouring of its German neighbour; it was flanked at the eastern corner by a square tower, 26 metres high, whose base, hollowed out by large arches supported by statues, extended as far as the quay ramp.
The interior of the palace had a courtyard (patio) with columns in the same architectural style, with galleries on both floors, an elegant balustrade and a superb frieze also in the Renaissance style. In the centre stood a beautiful statue of Velasquez, whose pedestal featured subjects from some of the most famous paintings by this great Spanish master. The staircase that led to the first floor opened into this courtyard and was decorated with a boss that was a reproduction of those of the University of Alcala and in which the strange and curious whims of Renaissance art were played out.
The royal pavilion was occupied in its entirety, except for the part reserved for the general commissariat, by an exhibition of retrospective art, for which the Queen had lent some of the marvels contained in the royal residences, among others the magnificent collections of tapestries from the palace of Madrid; the government had sent the curiosities of the national museums and many private individuals the valuable objects which they kept in their collections and which were a proof of the greatness and a memory of the discoveries of Spain.
There were thus gathered together a considerable number of objects of art, of incomparable value and which, for the most part, had never been presented to the public eye.
All these marvels had been arranged with exquisite taste in vast halls, which seemed somewhat empty to the ignorant stream of visitors, but where they were placed in full view for the admiration of amateurs.
On the ground floor, the walls were hung with Flemish tapestries of the fifteenth and sixteenth centuries, a number of which had belonged to Charles V. Especially admirable was the series of marvellous paintings woven in gold wool, representing the Conquest of Tunis and scenes from the Old and New Testaments, executed in 1543 from cartoons by Juan Vermayen, the Flemish painter of choice of the great emperor; it was impossible to imagine a more admirable execution than these canvases, whose figures seemed to stand out with an incomparable vigour, which painting itself had perhaps never equalled.
Some ancient weapons, from the museums of the Armeria and the Escurial, all of great wealth, were scattered in these ground floor rooms, under glass cases.
Of particular note were two ceremonial shields of Charles, one made of steel and gold engraved with etching, the other damascened with gold and silver; two others of Philip II and a fifteenth-century helmet.
On the first floor, the Throne Room contained the canopy that housed Charles V's throne. The background of the canopy was a superb Flemish tapestry depicting Christ on the cross; at the foot of the cross stood the Virgin and St John on one side, and on the other, Human Justice putting its sword back into its sheath and Mercy collecting the blood of Man. Under the canopy, a white marble bas-relief by Benllure reproduced the features of the young king Alfonso XIII, his mother the queen and the two infantes.
In the other room, on the Seine, there were still hangings belonging to the Duke of Sesto, tapestries made from cartoons by the Flemish painter Van der Weyden, which had been included in the inventory of Joanna the Mad, and magnificent silk carpets bought by Philip II in 1530 and depicting scenes from the History of Rome. This room still contained display cabinets where we see helmets and salads from the time of Charles V, Barbarossa and Philip the Handsome. In the middle, the arms of Boabdil, the last Moorish king of Granada, and his tunic in stamped red velvet, property of the Marquise of Viana.
All these rare and incomparably rich pieces made up a veritable museum, of which we must be grateful to noble Spain, tried by recent misfortunes, for having so generously divested itself to embellish our Universal Exhibition.