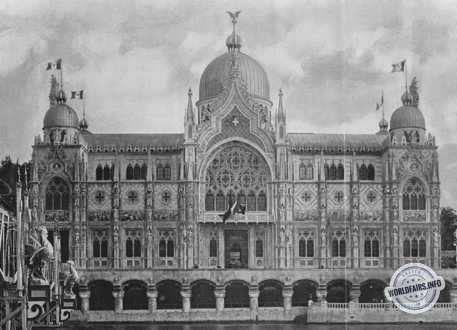 With its immense 65-metre long façade, its sculpted porticoes framed by brilliant mosaics, its ogival windows and its high golden domes, the Palace of Italy opened the line of official foreign pavilions magnificently. It was the first, in fact, that one encountered when approaching this section of the Exhibition and one of its side facades leaned against the Invalides bridge.
The Italian architects responsible for the construction of this superb pavilion were inspired by Venetian art of the 16th century, of which they have brought together here some of the most remarkable types, but without seeking to slavishly reproduce one of the buildings of the Queen of the Adriatic. The dominant motif was a copy of the famous door of the Doge's Palace, known as the Carta door - that is, the letter door - because it was reserved for those who were summoned by special letter to the terrible Council of Ten.
This door, built in 1455 by Bartolomeo, was repeated four times, in the centre of each of the façades. It consisted of a large arch, supported by strong piers; this was crowned by octagonal pinnacles and the faces of the piers were decorated with mouldings, statues and secondary pinnacles. A large gable joined the two piers and ended with a group of figures, while the ridge of each gable was crowned with a leafy crest. The tympanum of the gable was filled with a field of mosaics (imitated in painting) on which the coat of arms of the royal house of Savoy stood out. The semicircular arch was filled with openwork mullions resting on trefoils. A balcony opened above a straight-headed door. The pinnacles and their piers were repeated twice, separating three bays with historiated mullions. Above these bays was a brick wall with cloverleaf openings. This motif was repeated at each corner and was topped by a small gilded bronze dome. In the centre, crowning the building, a large dome, also in gilded bronze and ending in a bell tower, reproduced the main dome of the Cathedral of Saint Mark.
The whole ensemble, shimmering with colours and golds that sparkled in the sun, was of great richness. The detail of the ornamentation had been executed with the greatest care and the numerous statues that adorned the façades were very exact casts of famous works. But, all in all, this was only a temporary decoration and would probably not withstand a winter in our Parisian climate. Here, as with all the brilliant buildings intended to last only the short time of the Exhibition, only plaster, straw and wood were used. This sumptuous palace was only a carcass of planks covered with soft reed mats coated with staff, and a few blows of the pickaxe will have, at the desired moment, put it on the ground. But what does it matter if these superb effects were obtained at little cost and while ensuring, which was essential, the absolute safety of the visitors.
The interior of the Palace of Italy formed an enormous vessel around which ran a high gallery supported by light arches. Its vast dome, decorated with garlands of frescoed leaves, and its ogival windows, adorned with stained glass whose colours glistened in the sun, gave it a cathedral-like appearance.
The sections of Italian art industries had been brought together, and the nave was filled with the shimmer of ceramics and pottery from Pesaro, Vicenza and Florence, glass and glassware from Murano, bronze copies from ancient Rome, ironwork, porcelain, biscuits and terracotta. The ladies admired the beautiful embroidery and lace from Florence and Venice.
In one corner of the palace, a Florentine cabinet from the end of the fifteenth century had been reconstructed, which was a perfect sample of the Italian Renaissance. Under a superb coffered ceiling was the throne of Giuliano de' Medici, superb stained glass windows from the Charterhouse of Florence and the library of Lorenzo the Magnificent, ancient Tuscan bas-reliefs, and, as furnishings, tapestry armchairs in Hungarian stitch, a fireplace in carved stone from Florence, torchieres and andirons in finely chiselled bronze, and decorative dishes set on hangings of old green damask. In the centre, a reproduction of a piece of furniture from the Florence library supports an album full of rare documents relating to the history of the Italian Renaissance.
The upper galleries, surrounding the nave, were devoted to the products of the industrial and agricultural schools of the kingdom.
In short, a very relaxing exhibition, but one in which it was regrettable that Italy did not send us, as other nations have done, a greater number of the marvels of ancient art in which she is so rich.