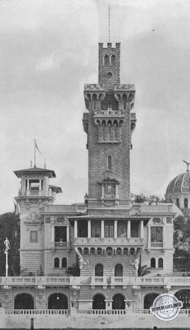 It was not without some surprise to see in the City of Nations, in the first rank of the European powers, between Germany and Sweden, the principality of Monaco, this tiny state, the smallest in the world and whose territory of 2200 hectares, enclosed on our coastline, hardly reaches the dimensions of a large estate. By granting it such a considerable site on this privileged and hotly contested spot, out of proportion to its real importance, the Exhibition's organising committee no doubt wanted to show its esteem for the remarkable services rendered to science by a prince who, on the other hand, has always shown such a strong devotion to France and whose son is currently serving in our armed forces.

Prince Albert has, moreover, taken very generous advantage of this privilege. The pavilion he had built was not the least of the ornaments of the superb scenery which bordered the Seine at this point. Of vast proportions, it represented the reproduction of various parts of the ancient Monegasque residence of the Grimaldis. A high 13th century feudal tower, pierced with battlements, stood on the very edge of the quay and dominated the whole building, whose main façade, facing east and in the Italian style, had an elegant arched gallery on the first floor, decorated with frescoes based on paintings from the Palace of Monaco.

The centre of the palace was a glassed-in courtyard surrounded by two floors of arcades, where magnificent exotic plants grown under the blessed skies of the Côte d'Azur had been grouped.

On the ground floor, a few specimens of earthenware, cements and liquors represented the modest industry of the principality. The rest of the palace was devoted to the exhibition of scientific collections gathered by the prince during his numerous cruises. For several years, Prince Albert had been travelling the ocean on his yacht Princesse-Alice, admirably fitted out for this purpose, to explore the depths and study the beings, so little known until now, that inhabit them.

Continuing the remarkable work of Milne-Edwards, he had thus revealed to us a marine fauna of which the numerous samples arranged in the showcases made us appreciate the oddity of the forms and the strangeness of the organism.

Next to the brightly coloured fishes of the prism, with their enormous mouths and finely serrated fins, we could see blind monsters with long tentacles, extraordinary crustaceans, actinids armed with suction cups, a whole mysterious and fearsome world which is agitated and swarming in the depths of the sea, where daylight never reaches and on which enormous pressures weigh, up to 200 and 300 atmospheres, which would flatten our organism like a sheet of paper.

In front of the display cabinets were the nets of fine silk gauze of great resistance and the heavy trawls used to dredge these abysses. Numerous watercolours lining the walls made it possible to follow these various operations.

Finally, in the basement, where a cinematograph was in operation, which allowed us to witness the main scenes of Monegasque life, a beautiful panorama gave us an overall view of the tiny but admirable territory of the principality.