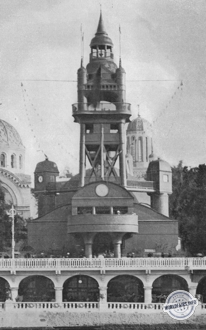 On leaving Monaco we found the Swedish Palace, which was certainly one of the most original buildings in the City of Nations. It was a strange assemblage of turrets, belfries, pavilions, masts, linked together by light footbridges, the whole entirely of fir wood and covered, façade, pillars and roof, with a shell of scales formed of slats cut and superimposed like the slates of our roofs. The architect had wanted to give us an idea of the coquettish houses which the tourist frequently meets in the Swedish countryside; but the whole had something maritime about it and, with the shrouds which decorated it and whose multicoloured flags fluttered gaily in the wind, gave the impression of the superb structure of a battleship decked out for a day of celebration. The appearance was, in short, shimmering and graceful.

A vast porch, spanning the quay, led into the interior, which consisted of an octagonal hall topped by a bright, luminous wooden dome. A frieze of brightly coloured Swedish embroidery framed the hall, which opened into charming rooms displaying industries from various parts of Sweden. Here were the finest fabrics of Skåne and Dalarna, so famous for their textile manufactures; there Ostrogolthia exhibited its lace, beside very curious ornaments of hammered gold, worked on by Lappish goldsmiths, a man and a woman dressed in a very original costume. Further on, female workers dressed in the national costume were weaving carpets in front of the loom before the eyes of the public. In another room, photographs and numerous albums showed us the most interesting places in the beautiful country of Sweden. Finally, at the end of the hall, there was a reception room, charmingly decorated, which did great honour to Swedish taste; it was, as everywhere now, "modern style", but very sober and very well understood. But one should not leave the ground floor without seeing the two dioramas which were installed there and whose narrow entrance opened on either side of the central room; they were two real jewels, and it seemed to us that nothing more beautiful, more striking, had ever been done of this kind.

The first of these dioramas (on the right) showed us the port of Stockohlm on a summer night, the night of Midsummer's Day (24 June), one of the shortest in these regions since the sun only leaves the horizon for a few moments. It was midnight. The city was asleep, the quays were deserted, bathed in limpid water, to which electric motors gave a current that is familiar to all those who have visited the capital of Sweden; in the foreground there was a buoy swinging. The illusion was complete. In the background a row of ships were anchored in front of the royal castle whose imposing mass blocked the horizon, and on all this delightful picture was reflected that shade of greyish light which is neither twilight nor dawn and which characterises summer nights in these latitudes.

The second diorama represented the icy plain of Gellivare, 110 kilometres north of the Arctic Circle, during the long winter night. In the foreground, sleeping at the foot of snow-covered bushes, was a herd of domestic reindeer being herded by a Lapp. The stars twinkled strangely on the horizon, while in the distance an aurora borealis projected its brilliant fireworks. It was deeply charming and impressive.

Leaving the hall, two staircases opening under the entrance hallway led to a small room on the first floor which opened onto the large covered terrace overlooking the Seine. The walls and vaults of the staircase, as well as the room between them, had been lined with all the objects used for winter sports in Sweden. There was a complete collection of the snowshoes used for walking on the snow, of skis, those immense wooden skates, sometimes more than 3 meters long, with which the soldiers of the Swedish army, as well as the sportsmen, cross enormous distances on the icy ground at a dizzying speed. There were also sets of skates, sledges and toboggans.