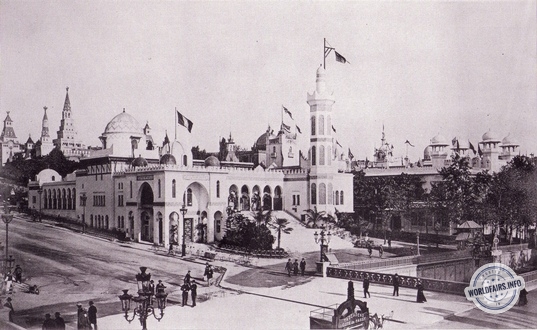 The Algerian exhibition was divided into two parts, one official, which had the aim of showing us the products of the soil and the artistic riches of this beautiful territory, the other due to private enterprise and of a purely picturesque character.
The official palace presented us, as it should, with a summary of the architecture of the Maghreb. The main façade reproduced the entrance to the mosque of Sultan Bacha in Oran; a high minaret, covered with earthenware and flanking it on the right-hand side, was a copy of the famous tower of Sidibou-Médine in Tlemcen. The dome of the Pêcherie mosque in Algiers dominates the central part, whose side façades also reproduce details of famous Algerian buildings. The whole ensemble, with the exception of some glazed tile coverings, was brilliantly white.
As we climbed the wide monumental staircase that led to the main entrance, we found ourselves in an elegant gallery framing a square courtyard, which, due to the steepness of the terrain, formed the first floor. From the gallery, we plunged into the courtyard below us, which showed us the interior of one of the most beautiful old Arab houses in Algiers. Around us were exhibited the works of the pupils of the native schools of our colony, works of a sometimes quite elementary execution, on which the public only glanced distractedly, but really touching in their simplicity, because they testify to the long and patient efforts that they must have cost the teachers who had them executed by our barbaric little subjects. A little further on, a very interesting plan in relief of the whole of our colony, on a scale of 200,000th; one embraced in a striking way the various zones of our Algeria, from the fertile Tell, which is bathed by the waves of the Mediterranean, up to, by crossing the high chains of the Atlas, the immense red and flattened expanse of the desert, at the very bottom of which at this very moment our soldiers are victoriously planting our flag.
We passed from there into beautiful rooms, where the rich products of the soil were exhibited. Here, what subjects of instruction for the attentive observer. One of the galleries was almost entirely occupied by the cork industry, so special to our colony; we saw, in all its forms, the bark of this precious oak, raw and just torn off, then planed into boards, cut into corks, etc. Then there are the long lines of wines, oils, cereals, the varied fruit models, esparto, the humble desert herb, which today provides us with our best papers. Moreover, by an ingenious idea, next to these products we were shown in luminous frescoes the various processes of their exploitation: the gathering of fruit under the orange trees of Blidah, the decortication of cork oaks, the pressing of olives, the harvest, the grape harvest, the working of the phosphate mines, which are the fortune of Algeria, etc. And, after seeing these pictures, one returned to examine the samples, whose aspect became more animated, less arid.
Returning to the front courtyard, a staircase led us to the ground floor, reserved for the archaeological collections. And first of all, in the very centre of the patio, a superb reproduction in relief of the ruins of the ancient Roman city of Timgad, which recent work has brought to light and which, with its long colonnades, its forum, its houses, its shops, its immense circus, seemed a second Pompeii. In a small adjoining room, a series of beautiful paintings executed in Timgad by the painter Montenard had been brought together and completed the deep impression produced by this plan on the spectators who, for the most part, were unaware that our colony possessed such a wonder.
To finish our visit to the ground floor, we must still pass in review casts of statues and Roman monuments, then curious collections of Kabyle pottery, drawings, etc.
On leaving through the door, which opened at one of the corners of the courtyard, we had only to cross the avenue to enter the second section of the Algerian exhibition.
Here we were shown a whole district of the Arab city, with a truly striking reality of execution. In the narrow streets, where the houses almost met above our heads, swarmed a lively, picturesque crowd of natives who mingled with the black, monotonous streams of visitors; In the dark shops lining the road, whose fronts were full of carpets, embroidered fabrics and all the glitter of Moorish art, we saw the workers at their workbenches, goldsmiths chiselling jewels, weavers weaving their carpets, potters turning their gargoyles. Then, on all sides, there were cafés where tambourines and cymbals resounded, pastry cooks frying their appetizing doughnuts, and almées performing Moorish dances. It was indeed the life, the movement, the noise, the din of an Algerian bazaar on a public holiday, and so this picturesque spectacle happily completed the somewhat severe teaching of the official palace.
Among the "attractions" of this bazaar there was one that deserved a special mention: it was the Stereorama installed at one end. Under this title we were presented with a panorama made up of planes in relief set in motion by an ingenious process which gave the picture all the appearances of reality. The spectator, placed in a darkened room, saw the whole Algerian coast from Bône to Oran pass before him as if he were on board a ship. As we left the port, the sun rose and gilded the waves on which a few boats swayed gently; the day rose, the sea became stronger; we passed Bougie, we skirted the shore bordered by abrupt mountains; then here was Algiers, covering its high promontory with white houses, and to end our journey, we entered Oran at sunset. On the road, we met from time to time ships of the squadron whose smoke was rendered with astonishing reality, torpedo boats, etc. The spectacle was really charming. The spectacle was truly charming.