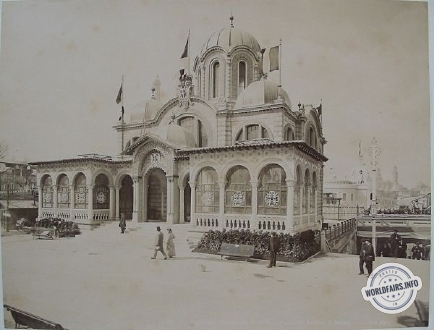 The Palace of Serbia was built in the Byzantine style and was very picturesque. A large dome dominated the centre and at the corners were four smaller domes which separated the four equal branches of a double transept. On the side of the main entrance, which protruded from the building, was a large flat-roofed portico that represented the narthex of Byzantine churches.
The exterior decoration of the palace was most pleasing to the eye. The walls were made of small squares of worked stone alternating with brick courses. As for the domes, they had been coated with a layer of paint that gave the illusion of bronze.
The interior of the building, decorated with brightly coloured murals, consisted of a single very high hall where the architect, Mr. Baudry, was able to arrange the support points of the domes in such a way as to leave all the space available for the exhibition and circulation. The aisles were divided into bays, which were occupied by the official exhibition of the Serbian government and by a number of national products sent by individuals.
The official exhibition included a very large collection from the Mining Department. The samples it contained gave us an idea of the richness of the silver and gold deposits in the region. Opposite, there were showcases containing the work of the students of the Kragujevatz military school of arts and crafts. This exhibition included everything relating to weapons, equipment and munitions of war. Further on, the Tobacco Board and the Department of Agriculture had exhibited the variety of products of the land.
But the visitor's attention was especially drawn to the rich collection of national costumes, which, together with a large number of Pirot carpets, Belgrade embroideries and beautiful gold and silver filigree jewellery, showed us what a man and woman in Serbia wore.
These brightly coloured costumes, overlaid with gold and silver embroidery, were dressed on artistically arranged mannequins, which together constituted a most interesting ethnographic museum.
The finery, more or less rich, differed only in detail and had an undeniable air of kinship between them. The main characteristic of Serbian women's costume was a coat, which was worn by women of all classes of society, from the grande dame to the most humble peasant woman, and which was differentiated only by the richness of the embroidery. The rest of the costume consisted of a bolero, jeletché, and a chalvari, which was a kind of skirt-cum-culotte, similar to that of our cyclewomen. Serbian women wore a belt around their waist, sometimes woven with fine pearls, and ending with a high metal clasp that served as a sort of corset; they wore a cap embroidered with silver and pearls.