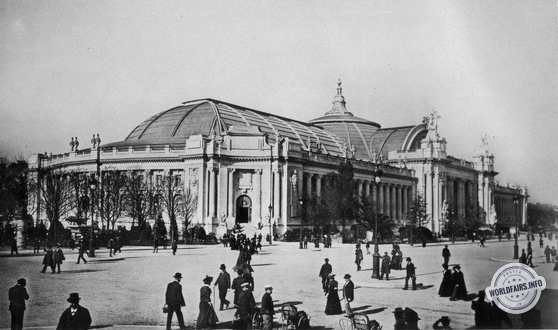 The Grand Palais stretches along the right side of the avenue (coming from the Champs-Elysées), a colonnade 240 metres long and 20 metres high at the balustrades, cut in the centre by a vast triple-opening portico which houses the main entrance and whose pylons are surmounted by colossal groups of statues. Behind the colonnade, whose fluted pillars decorated with elegant flower garlands recall the façade of the Palace of Versailles, runs a deep loggia decorated with coloured mosaics representing the great periods of art.
The whole façade, executed according to the plans of M. Deglane, is really majestic and of a great purity of lines; unfortunately, as soon as one steps back a little, it appears crushed by the immense glass roof which covers the interior gallery.
The palace, whose façade we have just briefly described, is linked by an intermediate part to another smaller palace, generally deviating from the general axis and facing the Avenue d'Antin. This later part of the Grand Palais, executed by M. Thomas, is of a very sober and elegant style. The main motif of the façade is a porch framed by columns and topped by a superb group of bronze statues. The pediment bears the inscription: "This monument has been consecrated by the Republic to the glory of French Art". On each side of the porch is a colonnade framing a high polychrome frieze.
The interior of this complex, which constitutes the Grand Palais, is composed, in addition to the immense front nave, 200 metres long and 45 metres wide, with a height of 43 metres under the central dome, of an infinite number of rooms, rotundas, and vestibules, onto which grandiose staircases open, all of which are decorated with a sumptuousness that is sometimes a little too elaborate.
It is, in short, a magnificent temple that has been built for the Fine Arts. For the duration of the Exhibition, the main masterpieces produced by painting and sculpture from all countries since the beginning of the century have been brought together, as well as the works of contemporary French and foreign artists executed over the last 10 years. It is understandable that we do not attempt to enumerate this admirable collection, which ranges from Greuze, Vigée-Le-Brun, David and Gros to the Impressionists and the representatives of the most modern art.
The execution of the Grand Palais, in its immense complexity, had to be entrusted to three separate architects, M. Deglane for the front part, M. Louvet for the middle part and M. Thomas for the back part.