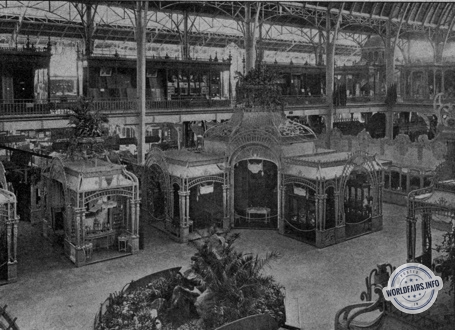 The search for the philosopher's stone or the elixir of long life by the alchemists of the Middle Ages was not all lost to science, but chemistry only really took shape with Lavoisier. For the past twenty years, its development has been mainly due to the union of scientists and industrialists. Applications have always closely followed discoveries, and factories have been created from scratch to manufacture this or that product.

However, we do not have in France establishments like certain private houses in Germany where a score of chemical engineers, doctors of science, form a highly paid elite whose mission is to do nothing. They search and search for years. Those who do not find anything are not troubled by their prolonged failure; in one day they will pay a hundredfold the cost of waiting.

The German exhibition, which had been arranged with an understanding of the effect of the triumph of the "art of the jar", was, according to the specialists, of a scientific height that could only be compared to the extent of its applications. A Linde air liquefying machine was in operation before the eyes of the public, which was all the more amazed because the operation seemed mysterious. Russia also presented its numerous chemical products, its leather with a special fragrance due to the birch bark, and its state papers with impeccable watermarks in a very picturesque way.

Belgium showed paintings symbolising glass, paper, dyeing, soda applications, and a very full exhibition of her chemical industries, which owe their great development to the vicinity of the coal factories.

Chemistry has begun to enter the pharmaceutical field, and the simple substances are replaced by their active principles, glucosides or alkaloids, created from scratch in the laboratories. If one is reluctant to grant chemical preparations the same healing sweetness as natural plants, at least it must be acknowledged that antiseptics and sterilising devices have saved many human lives. The display of these substances in iridescent colours of all the shades of the prism was presented in showcases of an unforeseen style, where light irons curved in delicate spirals, to support gracefully shaped cups and jars. Remedies or poisons could not be offered in a more gallant way than the architect Benouville had done.
Perfumery could once have claimed a place among the products of agriculture; today it is well within the domain of chemistry.
Vanillin has replaced the scented pod of the tropics, and there is no longer any need to kill chamois to obtain musk. Judging by the heaviness of certain perfumes, the delicacy of the sense of smell has not been enhanced. They have also been democratised from the point of view of price, and to use them for half a million a year, as legend has it from Mme de Pompadour, would require a great deal of willpower.

Perhaps out of posthumous gratitude to a similar client, the perfume industry class had been inspired by the Louis XV style, modernised, however, by artists such as Mucha, for the very rich decoration of its salon, which had not been able to find a place in its real palace and had been installed in that of the Fils et Tissus.

His retrospective museum, composed almost exclusively of the Klotz collection, was amusing in its frivolous jewellery and elegant trivia. All the accessories of the toilet and the prints that surrounded them testified to the seriousness of our time; women, one would think, spend much less time than in the past on the care of their person!

The superiority of French perfumery is demonstrated by this figure: of the 30 million produced annually, two thirds are exported.

The German industry, however, is close to us. It had organised a delightful little collective pavilion. Its usual seriousness had been amused by imagining a small miniature theatre where the spectators were replaced by boxes and bottles of the most coquettish effect.

In the retrospective exhibition, beautiful paintings, some of which we have reproduced, depicted the workshops of a paper mill in the last century. Like the war, the industry was made of lace. The master papermaker, owner of the stream and the neighbouring meadows, walked quietly among the placid workers, at least in appearance, for they already had their claims and their strikes. The work was done in families; all the paper vats in the kingdom would not have provided enough for the consumption of a daily newspaper of our time.

The introduction of wood pulp and the manufacture of continuous paper machines transformed this industry. The need created the tool. In 1900, France consumed nearly one and a half million kilograms of paper per day for the many uses to which it was put and which were constantly increasing. By this means, the forests on the surface of the globe could be exhausted at the same time as the underground forests by the extraction of coal.
Few machines are as exciting as paper machines, because the transformation of the pulp can be followed in a comprehensible way.

Today, paper machines are being built that produce 1,000 to 1,500 kilograms of paper per hour, depending on the thickness of the paper, over a width that will soon reach 4 metres. The public admired several of them at the Exhibition, including one from the Darblay company, which manufactures the paper for the Petit Journal, and a German-made machine whose enormous cogs seemed to be assembled with the care of a clockwork.
The last gift of the beasts to mankind, the prepared hides offered all the varieties of leather in a very artistically presented exhibition.

The reporter of the 1889 jury estimated the turnover of the leather industries at 3 billion
to leather, and the personnel employed at four hundred thousand workers. The importance of the French tannery has increased still further, and its products, sought after everywhere for the quality of their preparation, are exported in considerable quantities.

In spite of the development of certain establishments and the substitution of chemical processes for the long tanning with oak bark, the industry has generally remained family-owned. It is spread over the whole of France, whose herds supply it almost completely for oxen and cows and about half for the rest.

Without going into the details of the numerous preparations of the skins, let us recall that oxen and cows provide the leather for soles and large shoes, for strong saddlery, for transmission belts; pigs and horses also, but for a much lower quality; calves are used above all for fine footwear and bodywork; leather goods and basanes come from sheep; goats are used for glove-making. Depending on the way it is prepared, leather can be used for an infinite number of purposes.