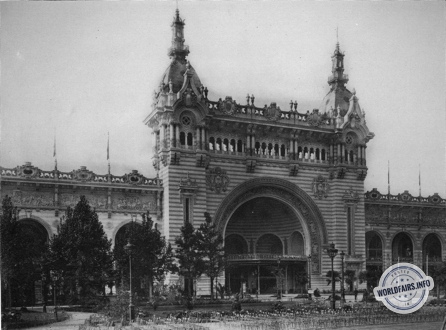 In the rooms devoted to cars and means of transport, a very curious retrospective collection has been assembled alongside the most modern models. First of all, we see authentic old saloon cars that used to serve between Paris and Lyon, Paris, Nancy and Strasbourg, etc. What heavy and inconvenient vehicles these stagecoaches were in the past! Our ancestors were truly modest and patient people, making do with such primitive means of transport, locking themselves up for several days in such uncomfortable carriages!
It took four days to get from Paris to Nancy, it took ten to get to Marseilles; and if you had not booked your seat eight, fifteen days in advance, you had no other resource than to bribe the courier outside the gates in order to get on the seat with him. Once on the road, there was little risk of your fraud being discovered, people travelled so little in those days!

And yet taste and luxury were no less appreciated than today! Look at these rows of sedan chairs, upholstered in light-coloured fabrics that have retained all their freshness, decorated with paintings, coats of arms and sculptures! These medallions representing embracing angels are marvels of finesse, and these black and gold designs, framing the whole chair painted in Martin varnish, are more supple, more light than anything we would do today.

Spain has sent two chairs which were carried by mules or horses, one harnessed in front and the other behind, and has been so kind as to show us the naturalised animals with the carriage of the time; the small horses in the first chair have their heads decorated with yellow and red ostrich feathers, the others are heavier and were intended for more arduous travel. The saddles of the horses show that a driver was sitting on each horse to guide them safely.

It is easy to imagine that this elegant and strange device was used by a prince visiting his subjects, by an ambassador travelling to a foreign country or by some beautiful lady of the court on her way to a ceremony. How far away those times seem, and how can we believe that even today, in the South of France, in Montpellier for example, rich ladies use their sedan chairs to go to the ball! Carriages are rare and expensive there; for the same price there are porters who take you inside your house and drop you off, dry-footed, in the one you wish to go to, without having to suffer from the cold air or the rain.

The pretty little carriage that belonged to the Count of Chambord brings back many memories too! It has the appearance of a gala carriage intended for a five year old child; a powdered and gallooned dwarf could only sit on the seat to drive it! Its gutted bonnet shows a large hole through which one would like to pass the hand to caress the cute head of the august child.

One hardly sees sledges in Paris, the climate no longer lending itself to this northern sport, but Trianon and Cluny have preserved for us a few specimens of great richness, which make us believe that the winter was less clement in our dear France in the past. We will only mention one mahogany sledge, Empire style, supported by golden griffins, which seemed to me to be quite original. On the front a female figure holds an amphora and a cup, and further forward, on the branches connecting the two sides, an eagle with outstretched wings is perched, seemingly carrying the vehicle through space. The carvings are very fine and have certainly been made by the hand of a great artist.

When we contemplate the rudimentary instruments which, at the beginning of the century, preluded the emergence of our bicycles, we understand why it took so long to perfect and adopt them. These shapeless machines, whose wooden wheels are so crudely and yet so ingeniously joined by crosspieces ending in a horse's head, were of elementary simplicity! What skill it took to hold on to them! With what difficulty these poor wheels had to advance on the roads, whereas today, thanks to the rubber covering them, one can move with the speed of the wind, cross the spaces and feel really at ease on a well-conditioned machine.

But here is something even better in terms of progress! Here are the latest cars built with real luxury. Here, too, is a flying machine hanging on the hanger, imitating quite exactly a bat with its wings wide open. When we see the enormous progress made during this century with regard to our cars, our bicycles and our automobiles, we feel entitled to admit that all is not united, that the discovery of the dirigible balloon is only a question of time, and that it is not impossible that some persevering and daring genius will eventually discover a means of keeping himself aloft, or even of crossing it.