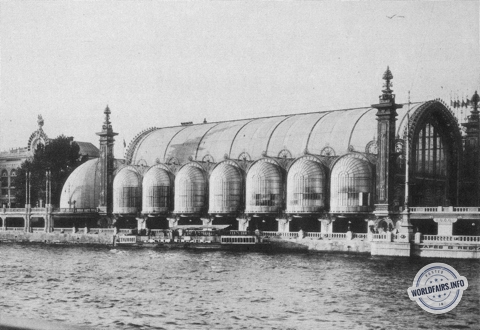 Their description can be summarised in a few words. Imagine two parallel naves, in all respects similar, 82 metres long, 33 metres wide, and 18 metres high at the top of the arch. They faced each other across an esplanade and their similar facades in the form of large pointed-arch porticoes had three arched doorways opening side by side; as in a Gothic cathedral there were multiple bays in the back of the vast porches. Two light pylons, 19 metres high, completed the decoration of the facade, which was made of iron and glass like the rest of the greenhouse. The iron had been treated as lightly as possible; it was only used in thin, almost invisible lines, the essential frame for the glass, which was, moreover, hidden under light green and pale pink trellises, harmonising very well with the grey tint given to the metal fittings and the inevitable frames.
When we entered one of the greenhouses, we were astonished by the lightness and beauty of the construction, which had not been so skilfully combined until now. The building consisted of a central oblong nave, the vault of which was supported by slender columns, seven on each side, these columns, with iron braces, were also covered with latticework; they had as a capital, at the point of the sections where the arch of the dome began, a planter-corner, which was filled with plants with drooping foliage, and which constituted a delightful novelty.
Bordering the nave were "high" sides, raised by three steps, separated by the columns and forming a semi-circular corbelled window on the outside terrace, and opposite, on the same level as the rue de Paris. This new arrangement was a great success. Indeed, in the central nave, the Sociéténationale d'Horticulture de France, which had organised fortnightly floral exhibitions, had been able to lay out a delightful French garden with beds, baskets, flowerbeds for outdoor plants, roses, pansies, violets, and all the other plants that are the glory of our gardens, and to use the windows for exhibitions of a different character: orchids, succulents, rarities, etc. With the climbing plants attached to the columns, a fountain here, a statue there, and the virgin forest of tropical plants with sharp points, terrifying blades, and extraordinary shapes, piled up in the circular rotunda which ended the greenhouse, at the opposite end of the portico, we obtain an unexpected result, which made the joy of the visitors.
Each of the greenhouses had a surface area of approximately 2200 m2. When the Horticultural Society made the greenhouses available after the exhibition, a number of annual competitions were held in better conditions than before.
For the 1900 World Exhibition, the first greenhouse belonged to the Horticultural Society; the second, down the Seine, was reserved for foreign exhibitors. There were representatives from Luxembourg, where the cultivation of roses had been pushed so far; from Belgium with its forced fruits, its "coal" grapes and its peaches which had known no other sun than electric light; from Holland with its tulips; from Japan and China with their peonies and chrysanthemums; from Mexico with its orchids; from the United States and Canada with their apples and their phenomenally large fruits.

A superb aquarium with a fish farming section was installed under the floor of these vast greenhouses. The Guillaume brothers who built it brought a lot of imagination to its layout; it was with pleasure that the public, increasingly initiated into maritime life by frequent visits to the beaches, saw again the living and moving fish and crustaceans that they were used to seeing piled up on the stone of the ports or on the marble of the markets.