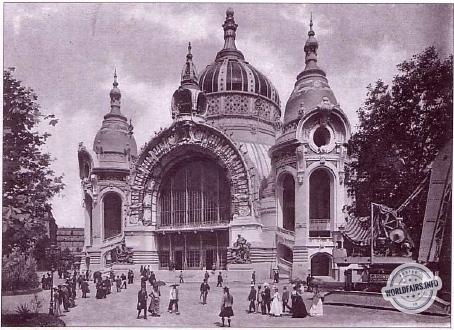 In the left wing, we find first of all the section of mines and metallurgy, a whole world of machines, metals, and coals, of which the Hachette guide, so precise and so complete, gave us an excellent summary.

"The great French metallurgy, it is said, has made a vigorous effort to assert its industrial power in the face of foreigners. Iron has been defeated and made more flexible, and lends itself to all whims and desires, taking its natural place in the decoration of this class, which has been adapted with as much taste as technical skill to its purpose. All the great metallurgical centres are represented in the palace that is devoted to them. Under the dome, as soon as you enter, the Forges de Douai erect a monumental iron door decorated with boiler stamps and metal plates; and you are immediately drawn towards the large central hall, under the skylight, where enormous columns rise up on all sides, where you can glimpse formidable masses, a metallic forest with sparkling trunks.... This is the Salon d'Honneur of the Société des Métaux. The effect is striking: all around the nave, at the entrance to each group, rise giant portals made of cast iron, steel, copper, expanded metal; colonnades, cylinders, made of pipes, plates, wrought iron; pylons, pediments made of curved rails; chiselled friezes, capitals made of curved tubes, falling down in sprays; it is a mixture of power and grace, of strength and suppleness, which produces a deep impression and seduces the eyes. Some of these steel plates, which serve as trusses for the Forges de Pompey portal, are 96 metres long and are cast in a single stream. The rolled rail at the pediment is 51 metres long.

The Aciéries de Longwy make up their columns of twisted rails assembled on cylinders, and these rails are 20 metres long.

The Forges de Pont-à-Mousson erect columns of cast iron pipes and cylinders; those of the Escaut and Meuse rivers assemble steel tubes; the Laminoirs de Bierche and Saint-Waast project bright sheaves of rolled tubes to the roof, topped by enormous copper balls; The Loire group (Saint-Etienne, Firminy, Saint-Chamond, Clandinon) asserts its vitality with enormous raw material cannons, armour plates and giant marine anchors. La Vieille-Montagne offers us a brilliant exhibition of its zinc industry; Micheville sends enormous vases made of iron beam rails (one of these vases is 18 metres high); Châtillon armoured turrets; the Delaunay-Belleville factories, a perfected generator. Next to these behemoths are, in their rank, the Forges du Saut-du-Tarn, Hennebont, Montataire, Denain and Anzin, the Aciéries de France, the Forges du Nord et de l'Est, Pontgibaud, the Hauts Fourneaux de Maubeuge, the Forges de l'Ariège, the foundries of Harfleur, the Compagnie Royale Asturienne, Métal déployé, the Cuivres de France, the Compagnie d'Alais, the pumps for wells of the house of H. Lemaire, and so on, etc."

The next section groups the raw materials essential to industry of all times, Stone, Marble, Coal, Ores of all kinds and the earths and sands that accompany them. According to the classification adopted in 1900, it shows at the same time the machines and devices which have made it possible to go into the depths of the earth's crust to discover and extract these raw materials, and to make them undergo the mechanical transformations which allow or facilitate their use: devices for sounding, storming, extraction, sorting, mechanical preparation, grinding and agglomeration.

Two great industries, different in every respect, that of the Mines and that of the Quarries, are thus brought together by classification, but in fact each has its own exhibition as they have their own processes, their own tools and their own clientele.

The coal mines produced in France in 1899 about 55 million tons with a total value of nearly 400 million francs. The value of the various ores (iron, rock salt, lead, etc.) is very low in comparison and hardly exceeds, for France and Algeria, 50 to 52 million francs. Lime phosphates, whose use transforms our agriculture, bring in 22 to 25 million francs. As for the quarries, they deliver nearly 250 million francs worth of raw products, the value of which is singularly increased when an appropriate cut has turned them into columns or polished slabs, or when a rational treatment has brought out their qualities in the form of plaster, lime or cement. All in all, our mines and quarries produce more than 700 million raw materials for our industries every year.