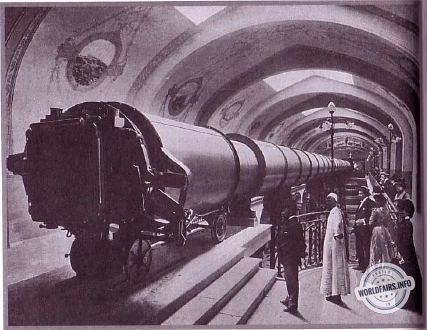 For two and a half centuries, astronomers have multiplied and clarified their observations to the point of being able to draw up a map of the moon; but this document is still very imperfect, because of the inadequacy of the instruments available up to now. The construction of the large telescope installed by Mr. François Deloncle at the Palais de l'Optique will allow photographs of the lunar surface to be taken at a very considerable magnification. If it is not true, as is commonly said, that the moon can be seen at the Palais de l'Optique at a distance of one metre, it is true that we have the illusion of seeing it at four kilometres, which is already a prodigious result.

Fifteen years ago, all the large glasses had only objectives suitable for the direct observation of the stars. MM. Paul and Prosper Henry, of the Paris Observatory, were the first to construct a lens of 0.60m aperture, where the optical achromatism is frankly subordinated to the requirements of photography. Their system received many improvements which were used in the telescope of M. Deloncle.

Sheltered in a gallery and supported by metallic pillars, it extends horizontally its gigantic tube of 60 meters in length, and of one and a half meter in diameter, a kind of luminous tunnel where a man can easily pass. The rays of the star to be observed are reflected in a siderostat, or mirror, 2 metres in diameter, 3o centimetres thick, and weighing with its frame about 7,000 kilograms. This mirror, subtracted from the rotation of the earth by a clockwork mechanism which gives it an equal and opposite impulse, collects the luminous radiation of the moon and sends it back through the two monster lenses of the objective to the one of the eyepiece. There, the image is received, magnified about 10,000 times on a screen; now, the moon 10,000 times magnified is the moon at about 80 kilometres. Photography will help to bring it closer.

Instead of receiving the image of the eye on a screen, we can collect it on a sensitive plate, make a durable print which we then project with enlargement; we thus obtain a reproduction of the lunar disk covering 12 metres; a mass of 5o metres on the satellite appears like a fly. In a word, one has the illusion of seeing the star at a distance of 4 kilometres. It is only an illusion, because the photographic enlargement, as you can see, does not constitute a real approximation of the ocular image.

M. François Deloncle, who wants to interest the public as well as serve science, did not think it necessary to back down from this little trick; in the name of popularisation, he even allows himself to put shows of grandiose fantasy before the eyes of the public. In dioramas, he reproduces lunar landscapes; then he paints an imaginary journey in a star; finally, crossing the centuries as easily as space, he tells in twenty pictures the genesis of the earth. To these astronomical views is joined, in other rooms, the spectacle of all the miracles of light; all the discoveries of optical science, all the wonders of the fairground are gathered in this marvellous palace. In three quarters of an hour, the visitor passes through twenty-six rooms and attends sixty different shows.