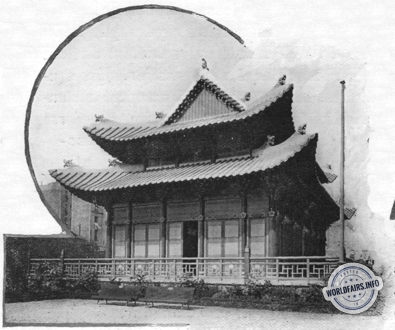 The Korean exhibition had been organised by a Frenchman, Count Mimerel, the general commissioner, with the help of Mr. E. Ferret, the architect. His pavilion was a little lost on the final borders of the Champ-de-Mars, leaning against the Avenue de Suffren, and it seemed that, out of shyness or modesty, Korea wanted to find in this remote corner the image of isolation in which she had long been content. Its exhibition was, however, worth a visit for more than one reason. Since the Sino-Japanese war and the declaration of independence, everything has changed in Korea. The army and the finances were reorganised, mining concessions were granted, electric trams and railways were introduced, foreigners were employed everywhere as advisers, teachers and engineers, and the Christian religion was openly practised. Is assimilation with the European states an accomplished fact? It took Japan twenty-five years to enter the "European concert", from the day it conceived the project, and Japan, which was prepared for it by two centuries of European contact in Nagasaki, has retained many features of its national genius. The new Korea is barely five years old, and it will take a few more years for a similar evolution to take place: at least it has begun in such a way that it does not seem to have stopped; this point alone is important for those who, having seen the all-Asian Korea of 1890, have seen the Tai-Han of today at the Universal Exhibition.

It was not, therefore, advanced machinery or modern industrial products that had to be sought in the Korean pavilion; the country's economic development had not yet reached that point. Korea is above all agricultural, it has rich and vast forests full of game, it produces horses, a superb breed of oxen, its coasts abound in fish, in edible seaweed; it possesses coal, gold. Of all this, the visitor can take a quick view, thanks to the samples arranged and labelled in jars; these eminently useful products will be abundant, will exceed the needs of the population, the day when a regular and just administration will no longer hinder the work of the common man and when roads and railways will allow the transport of goods other than on the backs of men or beasts of burden.

These important reforms will certainly be accomplished under the auspices of the present sovereign.

S. Mr. Ri Hyeng, Emperor of Korea (first name Tjoi-hoang), born in 1852, is the second son of Ri Ha-eung
He was the second son of Ri Ha-eung, himself a grandson of the prince of Eun-sin and a great-grandson of the crown prince Tjane-hog, who died in 1762; his mother was the lady Min, daughter of Min Tchi-kou, a nobleman from Rye-heunh. The prince of Eun-sin, through adoption, had become the head of a more distant branch of the royal family, and his descendants did not seem likely to be called to the throne.

The kings Hen-tjong and Tchyel-tjong having died childless (1894 and 1863) the lady Tjyo, queen-mother, widow of Ik-tjong, invested according to custom with great authority in the royal family, chose the second son of Ri Ha-eung as the adopted son of her deceased husband and herself, and placed him on the throne (1863); Tjai-myen, eldest son of Ri Ha-eung, was discarded in order to continue the sacrifices of his paternal line. The young king, on his accession
He married, in 1866, the lady Min, born in 1851 to Min Thi-rok, a close relative of Min Chi-kou. From this union several children were born; the three eldest sons of the king died in infancy, the fourth, Ri-Syek, born in 1874, is the crown prince; he married, in 1882, the lady Min, born in 1872, a relative of the queen and daughter of Min Htai-ho.


On the accession of the young king, his father was given the title of Prince of Iieung-saen (Heung-syen tai ouen koun) and exercised the powers of a regent without having the title. It was at this time that the massacre of French missionaries and Christians took place (1866). Ten years later, Korea entered into treaties with Japan (1876), then with the United States and European powers (1882 to 1886) and opened several ports to international trade. Internal dissensions accompanied by bloody troubles (1882, 1884, 1894), the policy of China, which wanted to maintain its suzerainty, last enshrined in the treaty of 1687, led to the armed intervention of Japan and the Sino-Japanese war (1894-1895), following which the queen was assassinated. Korea declared itself independent (1896), changed its name from Tjyo-syen to Han and took the title of Empire. From then on, it sought to model itself on the great powers.

What was on display in the Korean pavilion was a summary of the country's civilisation, and it is here that we must pause for a moment. Here were various silks, some as light as gauze, others thick, plain or brocaded; many of them were of bright and striking colours, some of them of a very soft harmony; we know what patient and delicate work is needed to prepare silk, to dye it, to weave it; The existence of silk in a country is a promise for the future, it is also the sign of a civilisation which is already singularly refined and delicate; the Koreans use silk from various species of caterpillars, an industry which came to them from China, and they were already masters of it in the first centuries of the Christian era. Copper metallurgy is very advanced; the crockery of the rich Koreans is all of a brass of perfect colour and sound; the lidded bowls, cups, basins, of various sizes and shapes, are of a very simple and very pure curve, of a very high quality.
of a very simple and pure geometric shape. On the other hand, in Hpyeng-yang, iron has long been worked into chests with a delicacy reminiscent of the workmanship of certain Japanese sword guards; a fine specimen of this furniture from Hpyeng-yang was placed on the right of the hall. The inlay of gold and silver on iron is often graceful and always very fine. The modern porcelain is comparatively crude; but there are frequently fragments, sometimes whole vases, which were made four or five hundred years ago, and whose clay is coated with a beautiful grey glaze with underglaze designs. Korean ceramics have other, less well known types, whose origin is not well established; they have had fanatical enthusiasts in Japan for several centuries: M. Collin de Plancy, the French minister in Korea, whose collections adorned the Korean exhibition, by a donation made to the Musée de Sèvres, had enabled French enthusiasts to get an idea of these ceramic products, which were new for them. The cabinet-making industry produces wooden boxes inlaid with mother-of-pearl, furniture in various woods with copper ornaments, and chipped cabinets which, by their elegance and good taste, would not be out of place in any home. Should we mention, as furnishings, these mats decorated with characters or animals of a broad, somewhat schematic design? Depending on their nature, they serve as blinds in front of the windows, as couches or mattresses for a population that lives in a squatting position and always leaves its shoes at the outside door of the house. The exhibition presented a curious collection of shoes, from the clogs mounted on two 10-centimetre high boards, cut from a single block and which, resembling the Japanese gela, are used like them for rainy weather, to the cute embroidered shoes of the women of the nobility (Korean women, without any artifice, have very small feet). There were also interesting jewels, pins, gold filigree cassolettes, luxury knives with handles and sheaths made of wood, jade, carved metal, chiselled, inlaid, decorated in a thousand ways. And a little further on, to complete the story of the costume, mannequins: the man in mourning with his ecru suit and his enormous straw hat, in the shape of a truncated cone, one metre in diameter at the base; the mandarin in ordinary uniform, then in court costume; the royal guard? In another showcase, a commander-in-chief's costume, said to have a historical origin, helmet, long, vermilion, lined, padded, metal-adorned cloth. The absence of a complete collection of hats is to be deplored; it would have been curious, for the Korean people have invented and wear some of the most impractical and strange headgear imaginable. A word now about the arts in Korea. The pavilion itself was a copy, executed by the architect of the Commission, of one of those royal halls which are the ceremonial flats of palaces, the chapels of the cult of the ancient sovereigns. A rectangular stone base with balustrades and access steps; in the centre, with a wide promenade all around, the rectangular building; a roof of grey tiles alternately convex and concave, which
and concave, which ensure the flow of water, and whose days and shadows break the uniform colour.

We must also mention Korean books: several showcases were devoted to them, and rightly so: the beauty of the paper, thick, resistant, cottony, sometimes matt, sometimes polished, and of an ivory tone; the size of the formats; the elegant, sober and full layout of the characters which flatter the eye, and are truly eloquent; the illustrations, still a little stiff and hieratic, but often quite simple and graceful.

In front of all these collections, one could feel how much the Korean country is changing and one could see it even better when looking at the very nice photographs exhibited which revealed to us, in the streets where Koreans dressed in silks were walking, - electric telephone wires, steam trams, - yesterday and today strangely mixed.