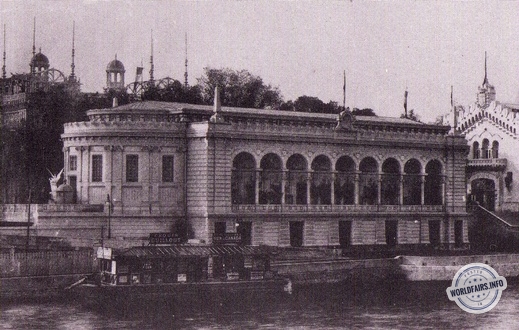 It was in the Palace of Mexico, which was enchantingly lit up in the evening, that some of the most beautiful celebrations of the Exhibition were held. This palace occupied an admirable situation, in prolongation of the rue des Nations, on the edge of the Seine, which was dominated by its terrace with immense bays. It was the favourite meeting place for all the princely and international elegance.

The President of the Mexican Republic, General Porfirio Diaz, whose administration is so beneficial to his country, which is prodigiously enriched by him, had chosen to represent him as Commissioner General at the Exhibition, Mr. Sebastian B. de Mier, Minister of Mexico in London. The Deputy Commissioner General was Mr. A. M. Anza, who was also the architect of the Mexican Palace. The deputy commissioner general was Ramon Fernandez, Mexican consul in Marseilles, Garcia Torrès, embassy attaché, and Albert Hans, former artillery officer.

The Commissioner General, Mr. Sebastian B. de Mier, a brilliant diplomat, well known in Parisian society, in which he has been involved for many years, has been able, during these six months, to attract and retain all the sympathies attached to his country.

The Mexican Palace had the most beautiful appearance; it was designed, not in the Aztec style, as in 1889, but in that neo-Greek style which, in the mind of the organising committee, was to mark, instead of the glorification of the past, the modernist tendencies of the present. The building was built of wood and staff, with very pure lines: on the river side, a loggia extended its colonnades and balconies over a length of almost 100 metres.

On the opposite side of the building, there was a majestic staircase decorated with marble statues, through which the interior was accessed.

Admirably designed for its special purpose, the palace's interior was an immense rectangle terminated by two hexahedrons, one of which housed a monumental staircase, the other being used for the Fine Arts salon. The staircase led to a wide gallery cantilevered all around the interior, and the end opposite the staircase ended in a spacious balcony overlooking the Salon des Beaux-Arts already mentioned.

Arched niches, lined with beautiful display cases, followed one another without interruption along the entire length of the gallery. Similarly, on the ground floor, similar but more spacious spaces were still occupied by display cabinets.

Here the architect had to contend with a double difficulty: the rigorously measured space and the accumulation of various objects making the interior of the palace a veritable encyclopaedic exhibition bringing together all the branches of human activity, and consequently likely to frighten by its proportions.

Mr. A. M. Anza had succeeded in satisfying the practical needs of the exhibition, while giving it a perfectly harmonious and even attractive appearance.

No sooner had one entered the doors than one found oneself in the middle of an immense hall (60 metres long and 23 metres wide) from which one could, by simply looking around, take in the whole of the Mexican exhibition in a few moments.

On the one hand, the hemicycle-shaped hall invited the visitor with its sumptuous decoration; on the other hand, the majestic staircase led him towards the varied treasures of science and industry. The daylight distributed in profusion through the glass of the hall ensured perfect regularity of daylight.

This result was a great credit to the eminent architect and deputy commissioner general, whose work was undoubtedly among the best of the Exhibition.

Such was the setting. Let us now take a methodical look at what it contained. We have noted the vast dimensions of the palace, larger than those of other continental powers. This is because, whereas the great States had only allocated their pavilions to historical re-enactments, to special installations, dispersing their exhibitors in all groups and classes, Mexico, on the contrary, had insisted that, in accordance with a sort of tradition, the three thousand exhibitors who showed their products in 1900 remained grouped together in a common building and in a single section.

The place of honour in the pavilion, the central point of the hall, therefore, opposite the main entrance hall, was reserved for the tobacco industry, and more specifically for the manufacture of cigarettes. Here one could see pretty Mexican women guiding with their alert hands the machines, each of which produced three million cigarettes a week, a figure far higher than that achieved in our French factories. To the right and left of this central part devoted to tobacco, large showcases displayed the manufactured products of Mexico, especially the fabrics from the Orizaba factories, which have the latest industrial improvements, and are driven by electricity; then came the different exhibitions, or sections, corresponding to all the branches of human activity.

First of all, there was the very attractive exhibition which showed, through documents, statistics and photographs, the great sacrifices made by the Government in favour of primary and higher education. As in France, primary education is compulsory and free in Mexico, and the law is rigorous towards parents or heads of industry who neglect to send children aged between six and twelve to school.

The Government recently granted a credit of one million piasters for the construction of new school buildings, and the retrospective section, the exhibitions of Fine Arts, of the Press and Bookshop, and of Public Works, all of which have the greatest role in the country, were no less appreciated. Public works, in particular, have expanded surprisingly:

Since 1889, in fact, the Mexican railways have seen their importance increased by the creation of numerous new networks, which, in all, exceed 14500 kilometres. Even an inter-oceanic line has come into operation.

This line connects Coatzacoaleos and Santa Cruz, thus offering remarkable facilities for international transport, and is intended to develop, to a large extent, commercial relations with Japan and China. The creation of the port of Mazatlan, which will give full value to another inter-oceanic line, may be considered one of the greatest undertakings of this time, by the difficulties to be overcome as much as by the services expected from it. At present the plans are drawn up and work has been underway for several months.

The port of Vera-Cruz, which is today among the best and most important in Mexico, is the work of the Government, which has brought it to its present state in less than ten years. The port of Tampico, for which two immense parallel piers extending up to 4 kilometres into the sea had to be built, and which cost more than 2 million dollars, is another example of the development mentioned above.

The Government has also given special attention to coastal lighting, which is under the administrative control of the Ministry of Communications and Public Works. At the Exhibition, the apparatus of two lighthouses under construction on the Pacific coast were shown.

In the Mexican Palace, agriculture, horticulture, etc., also held a place proportionate to their nature, which is very great: all cereals are cultivated in the lands of Mexico, as well as rice, cocoa, coffee and a large quantity of fruit. Vanilla is cultivated rationally and is greatly favoured by the climate. The same is true of sugar cane. The vines have suffered little from phylloxera, and the wines of certain regions, notably those of Par-ras and Coahuila, are beginning to enjoy a certain reputation.

Besides these wines and pulque, the national drink, made from the juice of the agave, of which no less than 3114,000 hectolitres are consumed annually, beer is tending to enter more and more into the consumption.

Several breweries have been established in recent years in different parts of Mexico and have developed rapidly. The principle adopted for the production of beer is the so-called "bottom fermentation" principle.

The distilleries of spirits, already numerous, have improved their production in remarkable conditions, thanks to the introduction of new processes and perfected equipment. A great future is open to distillery and to the manufacture of liqueurs in general, thanks to the abundance of fruits of all kinds and alcohol-producing plants.

It was clear from these exhibitions that important resources are offered in this country, not only to arms but also to capital, which will find excellent and fruitful employment there.

The decline in silver, which could have resulted in serious economic disadvantages, only gave a great development to the other branches of the mining industry and in particular to the exploitation of gold, copper, antimony, mined coal, etc.

Numerous samples on display gave an idea of the variety of products extracted from the Mexican soil. Among the non-metallic minerals were the newly discovered onyxes, which will undoubtedly be the subject of considerable exploitation. In order to give an idea of the innumerable applications of this new delicately coloured stone, whose tones are neither less rich nor less varied than those of agate, Mr. Sellerier exhibited objects of different categories made with Mexican onyx: vases, columns, decorative pieces, etc. Also on display was an enormous block measuring 3 metres in length, the largest piece of onyx extracted from Mexican soil.

The exploitation of earth coal mines, which for a long time was refused to be taken seriously in this country, now provides a production which seems destined to develop further and to meet, at least for a notable part, the needs of the local industry.

Lastly, let us note the chemical and pharmaceutical exhibition, that of the forests, with their unheard of wealth of samples, and that of the armies of land and sea; in short, on all points, the rejuvenated Mexico appeared capable of competing in the near future with the most industrial and commercial nations of old Europe.

All in all, the awards given to Mexico are a real triumph for this country.

It corresponds well to the sacrifices which the Government has always made in order to spread public education, which is free and compulsory throughout the Republic.

The exhibition proved to us that education has penetrated in waves into the large cities and also into the smallest villages. The works, methods and programmes of the schools, the libraries, the museums and a great number of special publications propagate all useful knowledge among the public.


There are 12,000 schools in Mexico with an average of 900,000 students. According to the latest statistics, Mexico City and its suburbs have 341 schools with 65,000 children in primary and secondary classes and 6,200 students of all categories in higher education.

Recently the Government has allocated a sum of 1 million piasters for the construction of modern buildings for primary education in the capital. Secondary and higher education are also very well developed. As far as the preparatory school is concerned, boarding is forbidden by law and does not exist in the state school. The courses at this school last five years and lead to higher education. The studies carried out there correspond to the French baccalaureate. It should be noted, in passing, that the system of studies and examinations established is similar to that proposed by the Honourable M. Ribot, President of the Commission of Inquiry on Education, in his report to the French Chamber.

The exhibition of newspapers from Mexico showed us that the press in that country has well-written organs, reviews, illustrated publications, etc., which are widely read.