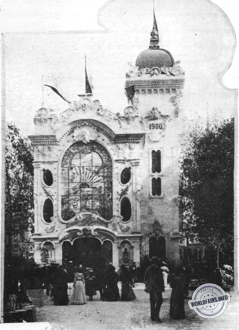 The South American Republics truly revealed themselves to the world at the 1900 Exhibition. They showed a vitality, an eagerness for progress, an activity of mind, crowned with tangible successes, which happily surprised everyone. Ecuador allowed us to admire all that can be expected of a young, ardent people, justly proud of their growing prosperity.

The Ecuador pavilion, erected at the foot of the Eiffel Tower and destined to be transported to Guayaquil to serve as the municipal library, occupied an area of i5o square metres. It was a beautiful two-storey Louis XV building, the work of a Chilean architect, decorated on the façade with a superb stained glass window by Mr. T.-H. Laumonnerie and blue earthenware decorations forming the 2-metre backdrop, where the busts of the poet Olmedo and the prose writer Montalvo, executed by Mr. F. Michelet, as well as that of General Alfaro, President of Ecuador, were notable.
The construction was made of iron, with wrought iron balconies. The walls of the building were made of staff imitating marble and decorated with sculptures and tiles. The height of the building was 12 metres. The 20-metre tower had the coat of arms of Ecuador in its centre, topped by a large condor with its wings spread. The six large shields on the ground floor bore the names of the main cities of Ecuador in gold letters, while on two panels on the rear façade were inscribed the names of the sixteen provinces and the Galapagos archipelago.

Light flooded into the pavilion through seven large windows and a glass ceiling. There was a central gallery. The interior walls were lined with old red cloth and decorated with Louis XV glass cabinets, reminiscent of the exterior style. The central piece of furniture contained a rock with shrubs where a naturalist, M. Petit aîné, had artfully and tastefully placed the pretty specimens sent from the winged hosts of the Ecuadorian forests.


On a column stood the marble bust of M. Clémente Ballén, the much-lamented Consul General of Ecuador in Paris, where he died in 1893, and its Commissioner General at the 1889 Exhibition. This bust, which had been offered to him by his grateful compatriots, had been kindly lent to him by Mme de Nahmias, his daughter, at the request of the present Commissioner General.

Around the iron columns of the hall, whose ceiling was covered with fabrics in the national colours, were displayed the leaves, flowers and fruits of four beautiful exotic plants which recall the tropical vegetation of Ecuador: a cocoa tree, a palm tree, a banana tree and a rubber tree with other specimens of its luxuriant flora, sugar cane, vanilla, etc., at their feet. The main products of Ecuador's rich soil and samples of its industries were displayed in their shade. Among the first were: cocoa, coffee, rubber, cereals from the fertile valleys of the sierras, medicinal plants, barks and roots: quinquinas from Loja, sarsaparilla, coca, ratanhia, etc.; tobacco from Esmeraldas, corozo or vegetable ivory, collections of minerals of all kinds, marvellous woods for construction and cabinet making, whose variety is incalculable and whose quality is invaluable, etc. Among the latter were fabrics of yarn, wool and cotton, fabrics of vegetable fibres, especially palm fibres, such as the famous Jipijapa hats, unjustly called Panama hats, finely woven with the fibre of the toquilla palm and the comfortable hammocks made of mocora palm fibres, the renowned confections, laces and embroideries of the hard-working Ecuadorian women, the beautiful carpets, harnesses and saddles, the tanned leathers, the delightful little naturalised birds: hummingbirds, hummingbirds, lyrebirds, etc. Pottery, basketry, carved wood, jewellery, inlaid furniture, mandolins; cigars and cigarettes as highly prized as those from Havana; starches, flours, starches; in the food classes: pastes, elixirs and aperitifs, alcohol, cane brandy, aniseed-flavoured or not, beer, sugar from the large sugar factories on the coast, etc, etc. In the retrospective section on the first floor, which is much admired, we should mention antiques made of gold, silver, stone, bark, earth and wood; objects belonging to the aboriginal race; oil paintings, watercolours, lithographs, typographies, prints, bindings; pharmaceutical preparations, photographs and views of Ecuador, etc., etc.

The concession of a bar was granted so that Ecuador's renowned cocoa in the form of chocolate and its excellent coffee could be tasted.

The Commissioner General of Ecuador had done everything possible to ensure that the fertile Republic of Ecuador could provide dignified accommodation for its exhibitors and rank honourably among the nations friendly to France. This task was admirably fulfilled by the Commissioner General, Dr. Victor-M. Rendon, former Secretary of Legation and former Consul General of the same Republic in Paris, where he has lived for more than twenty-five years. Mr. Julian Aspiazu was appointed Deputy Commissioner. The Secretary General of the Commission was Mr. Enrique Dorn y de Alsua, former Consul of Ecuador in Paris and Secretary of its Legation in France, Knight of the Legion of Honour. Mr. Miguel A. Carbo, current Consul General of Ecuador in Paris, was the attaché rapporteur.

These senior officials have been able to make their country known and loved, whose history, political organisation and economic wealth were not sufficiently familiar to us.

r
From the political point of view, Ecuador comprises sixteen provinces and an archipelago, and it is estimated that the population of this country, being not less than one million five hundred thousand inhabitants, has about two inhabitants per square kilometre, whereas France has seventy-one; from the climatological point of view, this equinoctial region has only two seasons: the rainy season and the dry season, but it is rather difficult to describe one as winter and the other as summer, as the temperature is more or less the same.

The Guayas is one of the most beautiful navigable rivers to be found, measuring in places more than two kilometres in width, and in front of cities such as Guayaquil, for example, it is criss-crossed by boats and yachts, which give it a most picturesque appearance.

It was not until 1830, after the dissolution of Great Colombia, formed by Bolivar, that Ecuador was finally constituted as an independent state; it is now General Eloy, first supreme leader, then legally elected in 1887, who holds the presidency; his term of office expires on 31 August 1901.

As in France, the Republic of Ecuador has a Senate and a Chamber of Deputies, and the laws are made by the two Chambers in Congress; they sit regularly every two years in Quito, for sixty days, which cannot be extended.

With regard to the election of the President and Vice-President of the Republic, the law states that only citizens born in the territory of the Republic and aged at least thirty-five years may be elected; this election is by direct vote of the people and the term of office is four years.

The annual income exceeds the sum of 7 million sucres; the sugar, a strong piaster of 900 years of fine silver, is the monetary unit of the country, whose system is based on the decimal system, and the principal income of the government is assured by the customs of Guayaquil, that is to say, strictly speaking, by imports.

Ecuador is still one of the countries in the world that pays the least taxes, but the inequitable distribution of contributions weighs excessively on the most interesting of the soil's productions, cocoa, and serious reforms should be made in this respect.

The general finances of the country are in a very satisfactory condition; the governments have not borrowed since 1830, and it is useful to realise that foreign capitalists can safely invest their funds in the enterprises being carried out, being sure of a profit guaranteed by the immense resources of the country; everything, moreover, is in the process of development: roads, railways, canals; there is, moreover, a cable which connects Ecuador with the old continent, and the telephone is in operation in the principal towns.

Ecuador's trade is undoubtedly one of the most active in South America, and it is also one of those which
The trade with Europe is very extensive, France, Great Britain, Germany, Spain, Austria, etc., frequently sending ships to Guayaquil.