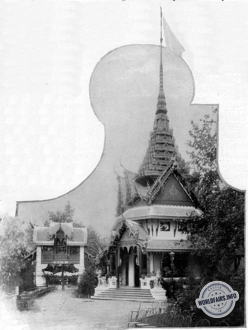 Siam, already very well represented in 1867, 1878, and 1889, had this time again a beautiful exhibition; this one was located at the Champ-de-Mars. It was housed under a yellow and red pagoda, which the general commissioner, His Excellency Phya Suriya Niwatr, minister in Paris, had had built and decorated with great respect for the national architecture. It was, indeed, a very curious edifice, reminiscent of the great pagoda of Watchang, in Bangkok, with its forest of towers, bell-towers, and spires of gilded bronze, rising above five-storey roofs, covered with porcelain tiles, green, red or blue, and resting on frames, endlessly excavated, illuminated with all possible tones, plated with mother-of-pearl, or fragments of mirrors.

In the interior one admired superb collections of objets d'art and especially samples of teak wood which are one of the riches of the country and whose exploitation was revealed to us in the most curious way. We can see a summary, as it were, of the life of a part of the population and an interesting mixture of Burmese and European trade elements which is worth mentioning to show how Siam is still both very Siamese and civilised.

Generally speaking, the concessionaire, or rather the Burmese tenant, has very limited resources; he uses all means to obtain a lease of a forest from the owner of the forest and the local authorities. Once this is obtained, he approaches a Bangkok trading house for the funds necessary for exploitation, which advances him the capital at a very high interest. At least half of the sum advanced is used to buy elephants, the rest is used for advances to coolies and is usually gone before a single tree trunk can be sold on the market.

The time between the actual exploitation of the forest and the moment of sale is very long: the first operation for cutting the wood consists of making a circular incision in the trunk of the trees to be felled. This cut is about 0.20 m wide and 0.10 m deep and is made about 1.20 m above the ground, preferably when the tree is in flower. At this time, the sap is most abundant and the teak dies more easily. At any other time of the year, the flow of sap would be much slower and it has been calculated that it would take about three years before the wood was dry enough to be sold. A few days after the cut we have just mentioned, a new one is made to the heart of the tree and after six months or a year it can be felled. It is then sufficiently dry. Once the trunk has been stripped of its branches, the elephants carry it to the rivers to form piles.

The buyer then puts his mark on it. This question of marks requires a brief explanation. There are several: the forest owner's mark, the mark applied to the wood sold, and finally the buyer's mark.

The royal administration also adds its stamp. This excess of marks can only be attributed to the fear of possible, and even frequent, theft of logs once the teak is gathered in trains or rafts in the river.

The purchase of elephants is one of the major expenses of forestry operations; they are becoming increasingly rare and their price varies between 4000 and 5000 francs. Some concessions have as many as fifty, representing a capital whose depreciation is a heavy burden on the profits that can be made. These animals are the only ones capable of exploiting the forests and they do this work with the greatest skill. At the time of the beginning of high water, around the month of May, they transport the pieces of teak from the forest to the place where the wood trains are formed on the rivers. These are made up by juxtaposing the logs and joining them together with the help of sturdy kneecaps passed through the holes at each end of the pieces. On the Me-Ping, these trains comprise about 100 logs, while on the Sawankaloke they have no more than 130.

Boatmen, usually three in number, take care of their descent with the help of long bamboo poles. It takes ten to fifteen days to cross the space between Rahenh on the Me-Ping, where the teak trains from the Xieng-Mai region meet, and Pak-nam-Po, at the confluence of the Me-Ping and the Me-Yom; three or four days to reach Cheinat, a station where the timber pays the floating fees and where the drivers of trains coming from the high rivers stop to return to the forest regions.

From there it takes eight to ten days to reach Bangkok.

The floating season begins in June and continues through July and August. After this date, the current is too violent, and the high water sometimes prevents to distinguish exactly the beds of the rivers. There is a risk that the wood will be stranded in the fields near the rivers. In October, November and December, these dangers have disappeared and floating can be resumed. These different periods, during which the teak is floated down to the Bangkok market, sometimes produce piles of logs at certain points, which weigh heavily on the possible sale prices. Regardless of these price fluctuations, the congestion caused by teak trains on this or that river gives rise to numerous thefts of pieces of wood. It is estimated that 3% to 5% of the wood is stolen despite all the precautions taken. The employees of the timber owners are the ones who usually commit these thefts.

Apart from the issue of elephants and floating, labour is a very important factor in the teak trade in Siam.

It is estimated that it takes a day's work to simply cut down a teak tree and strip it of its branches so that it can be carried to the river. The quantity of logs that arrived in Bangkok in 1899, having been, according to the reports from which we have borrowed the information contained in this study, about 70,000, one can see the concerns of the teak forest operators in recruiting their workers.

The latter are, or rather were, mainly Khas Mus (population originating from Laos).

Before the French occupation in 1893, they were recruited in large numbers for Siam by chiefs of their own tribe, with whom the forest owners dealt at prices varying between 30 and 50 rupees, i.e. from 50 to 85 francs per year, and per worker in addition to food (rice), tobacco, etc., all for one to two years.
for a period of one to two years. With food costing 8 to 8.5 francs a month, the total annual expenditure was hardly more than îoo to 190 francs. Some unscrupulous employers only paid part of their workers' wages and yet managed to keep them on their forest concessions with small gifts or fine promises. After the annexation of Laos by France, this
After the annexation of Laos by France, this state of affairs ceased and the French authorities demanded the payment of overdue wages.
Some Khas Mus loggers, seeing themselves, overnight, in possession of a rather large sum of money, rushed back to their homes, and the majority abandoned the exploitations. This is the reason given by Mr. J. Stewart Black, British Consul at Xieng-Mai, in his official annual report of last year, for the decrease in the labour force observed.

It is a fact that this decrease has led the farmers to resort more and more to the work of elephants, which significantly increases their overheads. In 1899, it seems, lumberjacks could only be hired at prices close to 200 francs a year (instead of 50 or 85 francs), and food itself has risen by 5o%. A good mahout charges more than 400 francs per year for driving an elephant. As can be seen, these prices are far from those charged for labour seven or eight years ago. It is necessary to count at present 350 to 360 francs per year and per woodcutter; whereas 100 to 190 francs were sufficient a few years ago. The Burmese and English houses have recourse to local Laotian labour, but the Laotian is very lazy and capricious, and renders poor service. According to the annual report of the British consul in Xieng-Mai, the teak wood trade in Siam in 1899 was in the hands of seven trading houses, four of which were English, one Danish, one French and one Siamese, representing, for the English houses alone, according to the same source, more than 50 million francs of capital.

We have chosen this very special subject of commercial study because it brings together all the factors involved in the industrial life of Siam; we see the existence of the inhabitants; their earnings, those of the merchants, and those of the Europeans; we see the appearance of the elephants, which are legendary there and which play the most important role, as they do in many other things. Finally, indigenous customs are mixed with European codes, customs matters, etc. All of Siam is like this and was shown like this at the Champ-de-Mars: ancient and modern at the same time. Born from the meeting of two streams of populations coming from the West and the East, the Siamese have kept intact the superstitions of the Hindus and the Chinese, in spite of the prescriptions of Buddhism, and they have added to them certain beliefs from Europe, the number of which will increase. There is much to be gained in the future from this country where the population is so docile and wise and yet preserves its own physiognomy, its own character, which is very gentle, very accessible to novelties, applied in a wise measure.