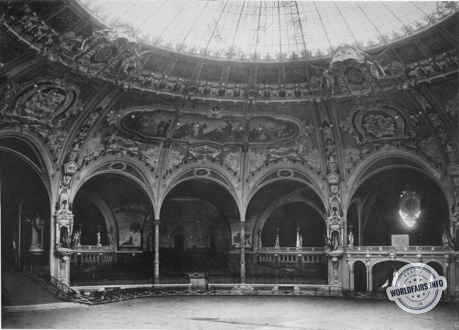 Several fair criticisms have been made of the general construction and especially the situation of the Salle des Fêtes at the 1900 Exhibition. It cannot be seen from the outside; crouched under the tubular glass of the nave of the former Galerie des Machines, it has been said to produce the effect of an enormous pumpkin enclosed in a gigantic frame.

On the other hand, relegated to the very back of the Champ de Mars buildings, behind the Palais de l'Electricité which defends the approaches, it only communicates with the outside through a single door, low and unstylish, opening opposite the Ecole Militaire: this is an unfortunate arrangement for a festival hall intended, on the main days, to receive 14 to 15,000 visitors from all parts of the Exhibition.

Having made these reservations, the harmonious taste of the architect, Mr. Raulin, who designed the interior of the hall, is to be commended. In spite of its colossal proportions, the whole is elegant and of a pretty colour.

The building consists of a dome of about 4000 metres in area, supported by a system of arches about 45 metres high. Under the arcade on the Avenue de La Mothe-Picquet side is the official gallery, while the opposite arcade houses a monumental staircase leading to a reception room.

The dome is illuminated by a stained glass window of 1700 metres in area, the work of Messrs Ehrmann and Gaudin; its brilliant colours, dominated by pink, yellow, purple and gold, give the light in the hall soft, warm shades. This stained glass window is supported by a metal framework placed on a latticework designed to attenuate the effects of dilation and contraction produced by the heat.

Four groups of paintings, signed by Messrs Cormon, François Flameng, Albert Maignan and Rochegrosse, decorate the room. In spite of the height at which they are placed they harmonize marvelously with the general colouring, of a soft yellow mixed with reseda. Vigorous golds and soft blue ornaments raise what could be a little bland in this tone. The crests of the thirty-six exhibiting nations are spread in a crown below the cornice of the dome and add even more vivid and cheerfully multicoloured notes to the whole. The symphony is completed by the deep pink of the arches, the buttercup draperies of the four main stands, and the alternating brick-red or white backdrops, heightened with grey, of the amphitheatre stands.

These stands are distributed three by three; they are designed in the form of a niche and are lit from above. They are accessed by corridors in the outer perimeter.

Let us add that the ventilation of the room is ensured by powerful apparatuses which emerge, not, according to the usual practice, through orifices placed in the upper parts, but through a clerestory made in the parquet floor, in the centre of the room.