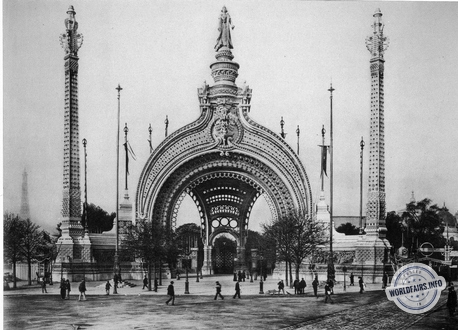 The "Monumental Gate", despite the many criticisms it received, played a decisive role in the image of the exhibition.
This richly ornamented arch has a certain grandeur with its three arches facing each other at the base and supporting a low dome. The main arch was surmounted by a tower overhanging a dome and at the tip of this tower was a statue of a woman dressed in a floating cloak personifying the City of Paris welcoming its guests and which the public named Parisienne, this work was by Paul Moreau-Vauthier.
The whole building, as well as the two minarets of 35 meters on each side, was made of a metallic network in which are embedded coloured glass cabochons, blue and yellow, covering tiny electric lamps numbering about 3200.
Under the vault of the arch itself, there were 70 windows ingeniously arranged to absorb the crowds that poured in and which, on some very busy days, exceeded several hundred thousand people.