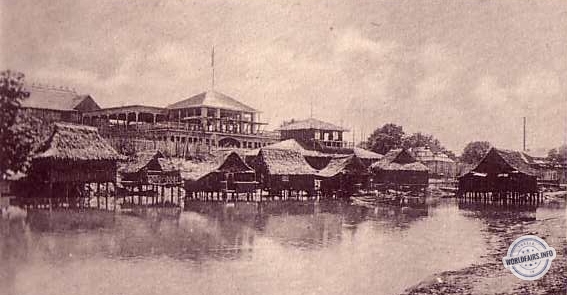 Strange sights, fascinating problems; this is what the Philippine Exhibition offers to our curiosity and meditation.

A palisade enclosing villages bathed by the waters that pirogues cross; huts among a tangle of leaves and lianas; a bamboo house perched on the top of a tree where men from one of the 1. A bamboo house perched on the top of a tree where men from one of the 1,600 islands of the Philippine archipelago nest, backward brothers of the artists whose works decorate the walls of the elegant palaces, and to bridge the gap, the intervening abyss, schools brimming with child life created by America, everywhere present here: two races yesterday enemies, now in friendly collaboration: such are the aspects which the eye first grasps. And the mind, following the eye, moves towards disturbing problems: at every step ideas arise before the walker, questions arise: by what means does a people rise from savage life to civilised life? By what reasons of humanity and by what benefits is the violence of conquest justified? What is the duty, what is the mission of the so-called superior races towards the inferior races? Ethnological problem, colonial and political problem, moral problem, all these problems which are intertwined, the American bravely tackled them, not as a philosopher, but as a man of action "natus rebus agendis": by the practical side, with the firm intention of solving them as well and as quickly as possible. This is the origin of this Exhibition, where he gathered together the 1,200 natives who, back home, "will be the most active missionaries of civilisation": where his legitimate pride also invited us to see the use he made of his power, which was barely six years old.

Conceived by Mr. Taft, Secretary of War, to offer the conqueror a vivid picture of his conquest, a reduced image of the Philippines with its eight million inhabitants; prepared by a mixed committee of Americans and Filipinos, this Exhibition, which covers 47 acres, more than any other particular Exhibition, encloses within its enclosure 1,100 extras, 75,000 objects capable of revealing to us the various aspects of native life in all its degrees, from the highest to the lowest.

Let's cross the Spanish bridge and enter the reserve that is the oasis of the great fair. A benevolent god spared our fatigue from this halt. First the Walled City welcomes us, which is a reproduction, not of Manila, but of the enclosure where the old Spanish fortress is imprisoned; instead of houses, it shelters the relics of the American war and bodies of native troops; from the top of the ramparts, the eye perceives Arrowhead Lake. a facsimile of the Bay lagoon with its row of black villages. Beyond the walled city, in the square of Santa Cruz, to which we shall return, stands the statue of Magellan, who discovered the Philippines and whose column in Manila dominates the Pasig River. To the west, the Agriculture building, the largest in the enclosure, where we are shown 100 varieties of rice, cotton, oils, cereals, hemp, rubber, hats, baskets, all the products of the local industry. And resuming our run, we find ourselves in the square of Santa Cruz, another souvenir of Manila, and the centre of the Reserve.

In this square, various buildings reproduce the Governor's Palace, Spanish style, a rich Filipino house, the Trade Building and the Manila Cathedral which acts as a kind of museum. At the threshold, a statue of Rizal, the hero of Independence, bears the signature of Isabella Tampinco, an indigenous sculptor; other statues and busts surround it, works of Filipino artists.

Indigenous art is still represented in the Governor's Palace by various paintings, including an allegorical group showing the Philippines in the guise of an adolescent girl offering an olive branch to Colombia.
olive branch to Colombia, surrounded by angels representing the Arts and Crafts. The painting by Resurreccion Hidalgo, another famous Filipino, was acquired by the Government for 25,000 francs.

But for us, the most captivating part of the Exhibition is still this cathedral which contains the Department of Education. There we can see the intellectual work of the American conqueror.

Behind the soldiers of the first army of occupation marched the schoolteachers, "Education follows the flag of the Stars and Stripes", and even better, General Merritt's own officers were the first schoolteachers of the Filipinos. The work was not delayed a day. The result is that after three years of domination, there were already more English-speaking natives than there were speaking the language of Cid after four centuries of Spanish domination; that instead of the 800 schools existing throughout the archipelago on August 13, 1898, when the Union troops entered Manila, there are today 2,900, with 200,000 pupils, taught by 3,000 native teachers, under the supervision of 1,000 American teachers. And in these 2,900 schools, not only are they taught to write, read and count, but also useful decorative arts, as evidenced by the carved wooden works, drawings and baskets produced by the pupils. Before our very eyes, to convince us, the school is functioning: a house of bamboo and palms where coloured children are initiated into the rudiments of science.

Education is the highest benefit of the conquest; there are others. The teacher, the soul-clearer, has as an auxiliary the pioneer who opens up the bush. More kilometres of road have been laid out in six years of American domination than during the entire Spanish regime. We do not see this, but we are told it, and everything in this Exhibition confirms it: these buildings, so picturesque; this Manila house, where transparent oyster shells replace the windows, and which contains the delicate work of female industry; the special exhibitions of commerce, geography, mining, forestry, and fisheries: all this tells us of the victories of the white man over black savagery, of the
All this tells us of the victories of the white man over the black savagery, of the natural resources developed and exploited, of the creative activity of the West replacing the indolence of the East, pruning, planting, building, developing the latent energies of the earth and of the man, of this Malay man so supple with whom she is making a people of labourers, merchants, soldiers. In fact, there is already a local police force and a native battalion that looks very good under arms.

Next to them we are presented with a tribe of Igorollès, copper-coloured Malays, with a blunt nose, thick lips, straight hair: otherwise solid-looking, and who are divided into sub-tribes: into Boutocs. They are divided into sub-tribes: into the Boutocs, head-hunters, dog-eaters; into the Seujocs, miners; into the Tinguianes, labourers; all of them ignorant of grooming, tattooed and smokers; then into the cruel Moros, disciples of Mohammed, armed with kirs, descendants of the ancient pirates, and who live on the waters, the most intelligent of the natives; into the Lanao Muros, who make their houses in the trees; into the Bagolos, fierce and coquettish. When we have named the Visayos, converted to Christianity, the gentlest of these islanders, who bring us back from the depths of black barbarism to the point where it brushes against civilisation, our cycle will be complete; we will have completed the tour of the little world that the Philippine Exposition concealed and revealed to us, of a charm for us all the more endearing because it is not yet and is already no longer, because it has been incessantly transformed since the touch of Uncle Sam's magic sword : The Philippines, a "young and yet very old" world.