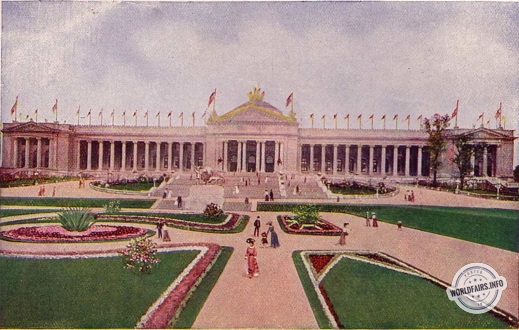 The first building one encounters when entering the Exhibition through the eastern gate is the Federal Government pavilion.

Elsewhere we have said that the Union Government has allocated nearly $1,500,000 to its particular Exhibition. Of that sum, the two buildings - for there are two - of the Government figure for about $500,000.

It does not appear that the Washington Government has misused that sum. On the contrary. First of all, it has chosen the right site for its Palace; it stands on the height east of Festival Hall, west of the Mines and Metallurgy from which the green lawns of Sunken Garden separate it. With its large dome visible from the centre of the Great Fair, it looks really great. Climbing plants and flowers supplied by Agriculture frame it nicely. It is not only imposing, it is sturdy, as Uncle Sam's house must be. The only one of the Exhibition buildings, it is built with a metal frame, with no interior support points.

To the south of this pavilion, and connected with it by a stepped path, is its annex, the Fisheries, (135 feet square), of a classical style, which completes the Government Exhibition.

From the outside, let us move on to the inside.

The character and merit of all that is seen here is, in short, that it is distinctly American.

The National Museum and the Smithsonian Institute take the lead. In the distribution of funds, they have had the lion's share.

The ministries or departments of state are strongly represented; that of Agriculture, which occupies the largest space in the main building, has endeavoured to show us the role of the state alongside the farmer; what are the forms and limits of official assistance; how it enlightens, directs, and encourages the effort of the individual. The agricultural colleges, the agronomic stations of the United States, Alaska, Puerto Rico, Hawaii, show interesting things. A bureau of plant industry gives us an overview of the work of the outdoors and the laboratory. Further on, we are shown the development and benefits of irrigation.

And from the fields we move on to the city.

The city will be represented, if you like, by this postal service of the United States, which we see operating before our eyes, with all its latest improvements. There is nothing like the spectacle of this beehive at work to give us the sensation of intense life, of that doubly modern life which is that of the great cities of the new world.

The Department of the Interior exhibits a panorama, with the most characteristic views of American flora and fauna, mostly taken in Yellow stone Park.

Distinct, though still dependent on the Government, is the Indian Exposition, which has a special appropriation of $40,000.

But the work of peace does not absorb all the energies of the citizen of the United States. The importance of the War and Naval Exhibitions can be seen when visiting this Palace.

Already, during the Dedication, we noticed the growing taste of the Americans for military parades, for the soldier. We make the same observation here, in another form.

First of all, a collection of cannons, illustrious weapons: precious relics, historical documents, among others, the original of the famous transfer treaty.

There is nothing, of course, in all these parchments, in all these piously displayed souvenirs, that smells of gunpowder; but not far from them is a very complete collection of war equipment, not dating back a hundred years.

The Navy is even more martial in appearance. It offers to black curiosity the very deck of an American warship, which we are free to inspect; a dry dock: scale models of each unit of the fleet: a miniature reproduction of the Annapolis Naval Accalmie, one of the latest creations of Congress, which has endowed it with 10. Finally, 200 sailors performing the exercise before our eyes: a whole ensemble that suggests that Uncle Sam, farmer, industrialist and businessman, would know how to put on the armour and wield the sword if necessary.

All in all, an installation and exhibition worthy of the great lord that he is, superior in scope, in wealth, in interest to those he had offered himself and us in Chicago.