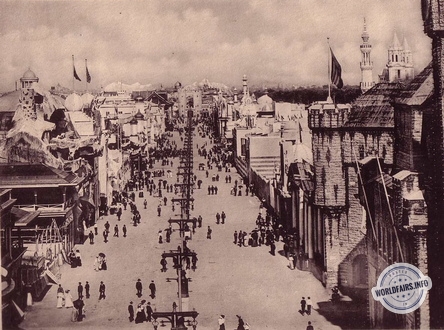 The Exhibition is a show, a splendid show, but a serious one, to a certain extent severe. A time comes when the eye tires of admiring mechanical and artistic masterpieces, when the mind tires of grasping their meaning. In every man there is a child who needs recreation.

The organisers of all the Exhibitions have foreseen this need and provided for it. They have provided for it with Cairo streets, Midway attractions, Paris streets, Pike, which are the fair side of the serious work.

The promoters of the "Greatest Fair in the World" were careful not to neglect this aspect of the fair: they gave it a gigantic development. The Rue du Caire, the Rue de Paris, the Midway attraction itself, although American, were only alleys compared to the St. Louis Pike. But the Pike is not only bigger, it is something else, something essentially modern, where science and the art of staging combine to give us, with the help of ingenious tricks, light and ice effects, spells and artifices of the electricity fairy, what the "World's Fair Bulletin" calls a "colourful page of the world's life"; something very American which astonishes by its variety, its strangeness, and, let's cut the word, its picturesque incoherence.

Nearly 8,000 extras, 6,000 humans of all races, 1,500 animals of all species in more than 500 "shows," worth a total of more than $5,000,000, are spread out along the spacious avenue which, from the main entrance of the Exposition, leads to the foreign pavilions, along the buildings of Transportation and various Industries: this is the Pike; "a mile of wonders" which "Pikers" can see unfold in 5 hours and 40 minutes at the American pace.

Let's go in: this is the eastern end. We are in the Tyrolean village, in the middle of alpine life, everything is there, the mountain, the torrent, the chalet, the colourful comings and goings of the crowd: agrarian shepherds, friendly Tyrolean women and the dances and songs from over there, everything, right down to the jingling bell and the dogs of Mount St. Bernard. But hadn't we seen and heard this somewhere else, or something like it?

What is quite new to us is the village next door, the Irish village, made in part, we are assured, of earth imported from the Celtic Isle. The old "Department House" acts as a café, where we hastily down a glass of authentic Irish Whisky.

Because one of the main "illusions" of the Pike is there, which requires us, the "underwater journey" with aerial return. A sort of openwork Nautilus dives into the bitter chasms, takes us, to the amazement of the fish, through the enchantments of the Ocean to the mouth of the Seine; then, somehow, a lift lifts us to the top of the Eiffel Tower, from where another ship, this one aerial, takes us back and lands us in the heart of the Exhibition we left twenty minutes ago.

And already we are in Seville, vibrating to the adventures of a bullfight mimed by puppets.

Further on, here is the aptly named Animal Paradise, where all the fauna of the jungle, the desert, the prairie: bear, tiger, ostrich, lion, kangaroo, camel, elephant, wolf and lamb, all reconciled, I believe, are frolicking together in a wild site: lakes, rocks, gardens, icebergs, palm trees...

But time is short and our programme is full. On our way to the Hells that are calling for us, we overhear the burial of our old acquaintance del Soto, in the Mississippi "Father of waters": and we sink into the "Kingdom of Shadows"; we pass the Acheron on the boat of a Caron who recites Dante to us: and we must greet his Majesty Satan, prince of evil, and shudder at the torment of the damned before going back up to Paradise, which is illuminated by the star of Bethlehem.

Without transition, we are in old St. Louis, then in New Orleans, in Cebaldo's palace where "living persons" who are Napoleon, Livinsgtone, Marbois, Monroe, debate before our eyes the purchase of Louisiana.

From there, let us jump to "Paris on the Pike" where we recognise the Bruant cabaret; from there to Rome, which Nero sets on fire for our joy: and leaping back, further, much further, we wander into chaotic darkness; a voice proclaims: "Let there be light" and there is light, and chaos is ordered. This is the creation of Rollair's world. Because, no doubt, man's first concern on earth was to groom, the Creation Palace is next to the Costume Palace, a revival from 1900.

Further on, the Wild-West; Redskins from 51 different tribes, Apaches, Sioux, Mohawks in warlike garb: Cowboys, Centaurs of the prairie: 850 actors.

And we return to Asia, to see nobly severe passages unfold through the windows of the Trans-Siberian Railway.

In contrast to these august solitudes, here is a teeming street in Cairo, where there is no lack of donkeys, camels and monkeys; then Constantinople, the famous Bazaar of Stamboul.

Not far away, the Chinese village; a group of Eskimos lost in the Arctic ice; the Klondike camp.

For the thrill-seeker, the Whirlpool Magic offers a plunge into a Maelstrom, from which, after what delicious anguish - "avalanche will you take me in your fall" - they will emerge in an enchanted lake.

Nearby are the caverns of prehistoric Mexico; and the maritime theatre, where at all hours of the day, between battleships, torpedo boats and cruisers, frightening naval battles are fought.

But how tempting this shadowy verandah is: it is the entrance to "an old plantation" that reminds us where we are, throwing us into the middle of a southern Negro village before the slave war. Here is the patriarchal hut and all the family that lives there, from the three-month-old to the "mammy" and the legendary old "uncle": and around the hut, the garden where tobacco, wheat, and watermelons "dear to the palate of the Negro" have been planted. As a perspective, cotton fields as far as the eye can see. It is the triumph of local colour, a striking evocation of the past: a past that is not quite dead, that lives again in these negro games, in the negro songs, a sort of melancholy drawl accompanying the popular dances of Alabama and Mississippi: the pigeon wing of old Virginia, the double march of Carolina; the "Pas Mala of the French negro": "souvenir of the Cake-Walk", what do you want from us?

Let us tear ourselves away from the lament of Creole Louisiana: let us now pass through scenes of carnage borrowed from all the wars of the New World: the war of independence, the Indian wars, the civil war: let us pass through the terrors of the flood where Galveston Island sinks; among the smoke and flames of a fire in New York: Let's cross the North Pole again to sit in the Scenic Railway, the unforgettable roller coaster, which through underground tunnels, dizzying bridges, takes us on the most fantastic, the most dizzying, the most bewildering journey.

Then, to make us completely dizzy, the slide of the flatboats, the waterfalls and the irruption in the raised waters of the lake.

And after the water, the fire.
Here we are in a kind of circus: men as agile as acrobats, as disciplined as soldiers, play out the tragedy of fire before us.

At the fire station, the alarm has just been sounded. These men jump from their bunks, harness their horses, equip themselves, rush in orderly fashion through the shifting panorama of a New York street.

And, just in front of us, a gigantic building burns, a glowing block: at the windows, people stretch out their arms, call for help. A gallop of horses and the rescuers arrive. Immediately, the manoeuvre begins, fast, precise, among torrents of smoke and flames. We see them, with aerial hooks, snatching the victims from death. Around the actors and the drama, the fire puts a red halo. It is very beautiful, very true.

Moreover, you can hear that there is no fire at all, that the fire is an illusion, like the view of New York, like the Pike. What is not an illusion, however, is the skill, the coolness, the science of these acrobats who are genuine firemen, the first firemen in the world, the best equipped, the best trained, the Hale's Fire Fighters of Kansas City, famous throughout the universe.

And that's it, the Hale's Fire Fighters Brigade marks the western boundary of the Pike and the end of this crazy race: 5 hours 40 minutes.

Yet we haven't said it all: more amazing than any of the Pike's wonders is the Street of Babel, where
i
There is Babel Street, where all the races meet and mingle, a multicoloured dust, white, black, red, yellow: where the Jefferson guards parade majestically, where negroes go, important planters, rich farm women, many a Creole lady "with unknown charms", and even a few Parisian women, too rare for the exiled Parisian. At night especially, the spectacle is magical, when the human river rolls its streams, chattering and disparate, under the blinding downpour of lights, a deluge of lights, compared to which all that we have seen elsewhere is only mourning and darkness, it is a dazzling sight! Where are we? In what century and in what country? in Africa? in Asia? in America? No. We are at the Pike, on any day, on any evening of the 212 days and evenings of the giant Fair.

It's a different matter when there's a "parade". This time, we have to hand over to the native Barnum, whose only grandiloquence equals the things he says:
"The parade of peoples and beasts on Pike Day. writes the World's Fair Bulletin, is indeed the greatest spectacle the world has ever beheld. In its barbarous magnificence, in its human interest, it far surpasses the Queen's Jubilee, the triumphs of the conquerors at Rome, the visit of the Queen of Sheba to Solomon.

Amidst a hurricane of music, the murmur of thirty languages, the shimmer of a thousand colours, an unparalleled caravan unfurls its serpentine course through the city of Palaces: Six thousand natives from near and far, two thousand animals of all kinds, advance in the strangest procession seen since the day they sought refuge in the ark! And only Noah's family was saved from the waves, while here representatives of all human races march towards the polyglot Pike in this solemn march of nations: Chinese, Japanese, Russians, Tyroleans, Irish, French, Turks, Caffres, Assyrians, African Pygmies and giant Patagons.

And Barnum goes on... but we are out of breath.