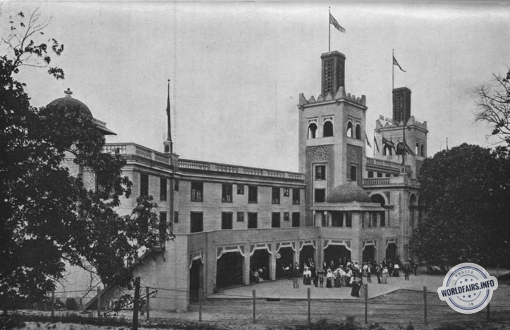 The St. Louis Exposition represents man's achievements in all the important activities of life, and reveals countless wonders. But all these splendours cannot be fully appreciated without proper comfort when visiting the Exhibition. The main problem, of all other fairs, is the question of accessible accommodation. This problem has fortunately been solved in St. Louis in the Inside Inn, which has come to be regarded as one of the distinctive features of the Exposition, and almost as much an object of pilgrimage for tourists as Festival Hall or the Agricultural Palace. It is not only the largest hotel in the world, but a remarkable meeting place for almost every nation on earth.

For a number of years, Colonel E.M. Statler has been leading restaurants in Buffalo and other cities. For the Buffalo Exposition he built and operated Statler's Pan-American Hotel. But this and other hotels for the exposition, whether in Philadelphia, Chicago or Buffalo, were outside the fairgrounds, and in many cases a considerable distance from the entrances. Colonel Statler conceived the original idea of a large hotel within the fairgrounds, the location of which would avoid many of the difficulties and tribulations of getting to and from the exposition in hot weather. The matter was taken up enthusiastically by the Exposition management, who realized that Colonel Statler's plan was, to a large extent, the solution of a problem facing the city of St. Louis, that of caring for the crowds. Colonel Statler obtained the exclusive concession for the hotel under the official auspices of the Exposition organization.

At present, the Inside Inn represents an investment of 450,000 dollars. It covers ten acres and contains almost 3,000 rooms, three times as many as the Waldorf-Astoria. Built in the form of a grid, it has spacious rooms that provide plenty of light and air. There are many legal proceedings. Every precaution is taken against fire. The walls are lined with asbestos, and a fire patrol is on the alert day and night. There are over a thousand employees.

The Inside Inn is particularly comfortable for visitors. The guest only has to register, and the hotel takes care of the rest. The price of each room, from the cheapest to the most expensive, includes admission to the exhibition centre. This avoids queuing at the ticket office to buy entry tickets, especially in hot weather. The Government House can be reached in five minutes' walk. Right next to the hotel is an intramural train station, where a train runs around the entire exhibition, with more than seventeen stops appropriate to each point of interest. No other temporary hotel in the world represents such amenities for tourists.

Located at the eastern end of the exhibition grounds, the Inside Inn enjoys a beautiful view of the imposing Plateau of the States.

The success of the Inside Inn is a tribute to the leadership of Colonel Statler. This marvellous organisational power was put to the test during the first month. On the opening day of the Exhibition he was seriously injured by an explosion and remained in hospital for a month. Yet, so well had he organised his forces for the world's largest hotel that the management went smoothly. During the second week, there were 4,200 people in the hotel, and almost all of them were checked in and accommodated in one day.