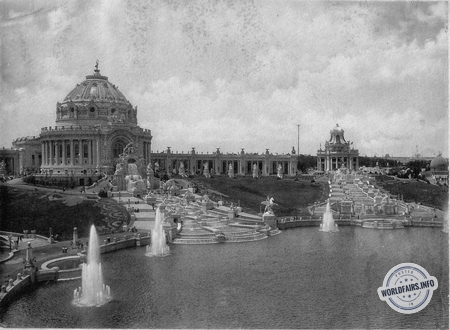 The guiding idea of the master builders was to make the Cascade, its sculptural ornaments and the architectural setting the focal point of the exhibition. At each stage the fountain widens until it reaches the large basin, so that the beauty of the entire spectacle is revealed at first sight. On either side of the cascades, there are bevelled lawns lined with flowers. The water of the three cascades flows in successive levels between white masonry walls, topped with balustrades, and highlighted at regular intervals by spouting dolphins carrying children on their backs.

The water that feeds the central cascade falls from a cave-like opening facing the festival hall. This sculpture is by the sculptor H.A. MacNeil, and symbolises the "Triumph of Liberty". The pool which forms the first drop in the waterfall is flanked by colossal sculptures by the same sculptor, representing an Indian chasing a buffalo and a woman riding a bull; the animals in each case being particularly well done.

The waterfalls on the sides descend from two fountains, executed by Isidore Konti, and symbolise the Atlantic and Pacific oceans.

This spectacle of energy and calm, with a relaxing lawn and the movement of the waterfalls, culminates next to the colonnade of the States Terrace, which meanders gently to the right and left of the dome of the Festival Hall.

The development of this decorative structure culminates in the attractive sculptural ensemble "Apollo and the Muses" by Philippe Martiny.

One ascends to the top of the hill by curving stairs, lined at regular intervals with statues of pioneers and explorers and other persons famous in the history of the discovery and development of the Louisiana Purchase; each of the colossal statues sitting at the top of the terrace symbolizes one of the states that make up the territory.
On the way up, the meaning of the work as a whole becomes apparent to visitors, and at the top, the design of the waterfalls is no longer simply unfolded as it was below.

Thus to make this building the focal point of the whole exhibition, the party room emphasises the feeling of gala, of festivity, whose spirit of festivity is the main goal that a modern exhibition has the right to expect and to achieve.

But it is at night that this building is best highlighted, when the lights on the buildings are turned off and only the lighting of the bridges and promenades remain.
It is then that the festival hall takes on a spectral dimension that encourages the imagination of visitors.