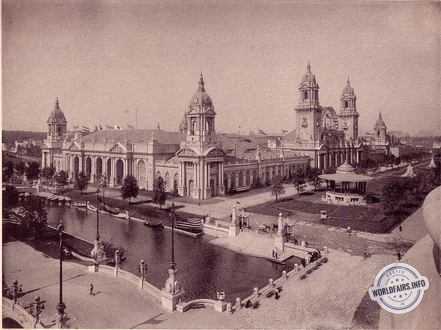 To the west of the large basin and next to the Palais de l'Electricité, the Palais des Machines extends over a length of almost 350 metres and covers an area of 2,500 square metres.

As the crow flies, it looks like a rectangle from which a strip has been removed along two thirds of its length; it looks like a rudimentary seat turned upside down. The plan is a little convoluted, but can be explained by the needs of the terrain and the layout of the roads along the edge, and has been adapted very advantageously to the interior layout.

The design and architecture of the building are in perfect harmony with its purpose: power and movement, solid foundations; slender towers, strong foundations and a profusion of supporting pillars as if to offer more resistance to the trepidation of the machines; numerous openings through which escape the shrillness and clatter of the steel.

All the faces are pierced with large openings. Six towers flank the corners, a little different in style, but all reminiscent of the Renaissance, in two superimposed storeys decorated with colonnettes, pierced with large bays and ending with a lantern.

Superimposed stone pilasters with hollow joints run along the walls and between the windows.

At the main entrance, two square towers, with openwork, project their two storeys and their belfry up to 265 feet high.

The first floor, lined with battlements, is rather reminiscent of the exterior stiffness, and offers, if not as much dazzle to the eye, at least a more powerful attraction to curiosity, with all the convenience of an easy and safe examination.

Thus, at the western end, one can see a group of driving machines capable of providing the power of 45,000 horses.

The largest of the machines is the vertical and horizontal refrigerating machine by Allis-Chalmers, of 5,000 horsepower; the most powerful is the Curtis steam turbine installed by the Compagnie Générale d'Electricité: this machine develops the force of 8,000 horsepower and can produce 12,000 with a higher steam pressure. There are also four generators with a power of 3,000 horsepower.

The largest Corliss engine at the Centennial Exhibition in Philadelphia had a power of only 500 horsepower.

The United States, England, Germany and France were represented in St. Louis by interesting Exhibitions including: steam engines, power engines, machine tools, gas engines, oil engines, hand looms, etc., everything that comes under the heading of mechanical industry and collaborates with man in the inescapable work.