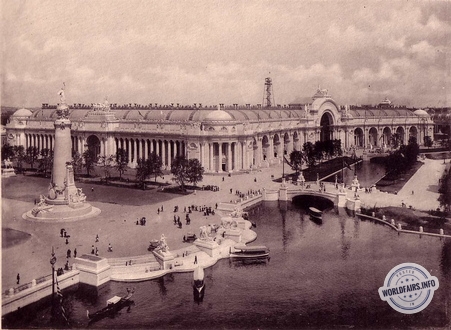 Almost at the centre of the Exhibition, the Palais des Manufactures occupies a place of honour.

The Place Saint-Louis, whose horseshoe-shaped terraces border the building on its eastern side, the statue of Peace which dominates the 33-metre high column commemorating the cession of the province to the United States, the allegorical groups of the Missouri and the Mississippi, the statues of Saint Louis, patron saint of the city, of Joliet, the explorer of Louisiana, and of Pizarre's companion Hernandez de Soto, the white man who is said to have been the first to gaze upon the waters of the Mississippi; The pylons, the basins, the whole set of decorations of the square give a more powerful attraction to a construction otherwise remarkable by itself.

The Palace covers an area of more than 5 hectares.

Bordered on the south by the lagoon, on the east by the Place d'Orléans, on the west by the Place Saint-Louis, and on the north by the main municipal street, it offers, as the crow flies, the appearance of two squares set at a slight angle to the connecting axis, projecting to the south and recessed to the north: it looks like an open book, with the large median aisle forming a kind of hinge in the book.

The style is simple and easy, although with an obvious search for elegance and variety, and recalls the Renaissance.

Moreover, the advertisement is not exclusive of art.

Arcades and porticoes all around; columns with slender shafts, but sufficiently narrow to support a fairly heavy entablature; all in the Ionic order, with a few fanciful flourishes. The southern porticoes are pierced by geminated columns.

To the west, the main entrance is surmounted by a sort of tiered capital, a truncated pyramid with guardians, with an allegorical group and trophies at the top. The south portal is heightened by an arched pediment resting on smooth capitals.

The windows are framed by double columns and intersected by a horizontal lintel, above which is a transom barred by the shaft of the inner base column.

The entrances at the four corners and in the middle form a vestibule and are symmetrically similar in style.

The roofs of the front buildings are arched and fall almost straight down onto a balustrade gallery that surrounds the building and bears a crest of cut metal, trefoil or foliage motifs.

In the centre of the palace there is an open-air inner courtyard crossed by the two main alleys. It is a sort of interior garden, decorated with plants and greenery, which evokes in the mind the memory of the interior courtyard of our Petit Palais on the Champs-Elysées.

This vast circumference is bordered by a gallery with double columns, in the same style as those outside, but lighter and with large arched bays between them. It has been said above that the Palace resembles an open book: a book without leaves, where the whole story would be written on the cover page, but where the interest, the attractiveness, the variety of the most compact of volumes would be gathered together on this page.

About 900 industries are represented there by their finest productions, and all the great nations of the world have brought their most remarkable products.

Japan occupies a vast space at the western end of the building: France and Germany are amply and advantageously represented.

Carpets, tapestries, furnishings, fabrics, crystals, glass, plumbing, heating and ventilation equipment, and lighting are on display. Among other things, one can see steel feathers, paper boxes, shoes and hats being made before one's eyes.