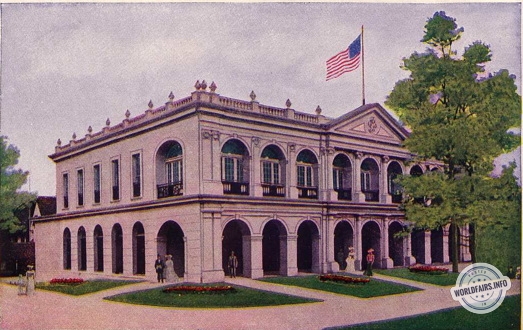 On the site next to the United States Government Pavilion is a faithful reproduction of the famous Cabildo as it was in 1803, when, on 20 December 1803, the document that concluded the sale of Louisiana was signed. It is furnished with furniture of the period and style of the eighteenth century.

In the reproduction of the Supreme Court room, where the transfers of Louisiana to France from Spain and France to the United States were signed, is displayed a facsimile of the treaty between France and the United States, signed by Livingston, Monroe and Marbois. In the same room portraits of the signatories, as well as those of Jefferson, Napoleon, Salcedo, Laussat, Wilkinson and Claiborne are displayed. In the large courtyard room on the second floor is the mahogany desk on which the Louisiana Purchase Act was signed.

In the courtyard is an original stone filter showing the method of obtaining drinking water at that time.

In one of the prison cells in the courtyard of the Cabildo are the original stocks used by the Spaniards in punishing prisoners, which were removed from the Cabildo in New Orleans. The lower hall of the Cabildo now used as a city courthouse, serves as a general reception and reading room where Louisianans are "at home". The building is 95 by 107 feet and cost $22,000.

Louisiana offers exhibits in nine buildings, including displays of its three major products based on sugar, rice and cotton: vegetables, sultanas, nuts, wood, game and fish. The unique displays of the Mine Palace are the devil in sulphur, and Lot's wife in salt.

But Louisiana, rich in historical tradition that gathers on the great events that commemorate the exhibition, has made great agricultural progress. Ten years ago, much of the rice consumed in the United States was imported from Japan and Honduras. Today, rice is grown intensively in Louisiana. During this period, the state has created a new agricultural activity that competes with the production of two other products, sugar and cotton. It is typical of the state's growth.