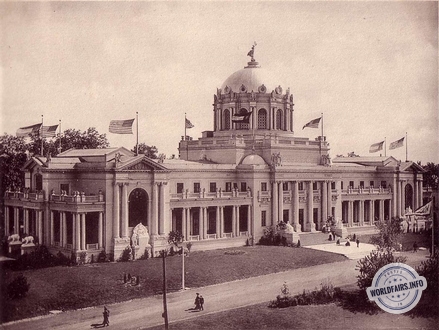 At the top of the hill is a magnificent piece of Roman architecture, the largest structure on the Plateau of the States, the Missouri Pavilion.
The Missouri Building consists of three monumental masses connected by balcony links, the crown of the dome and the tower are profusely decorated with sculptures. The dome, a perfect half-sphere, without any embellishment, is gilded and crowned by a statue representing "The Spirit of Missouri", created by the sculptor. Miss Carrie Wood, of St. Louis.

A beautiful colonnade of Corinthian columns, each pair of which is crowned by a seated figure, surrounds the drum of the cupola. This construction surmounts the central mass, and at each corner is a gigantic carved group symbolising the arts of peace, music, literature, art and architecture.

The building is entirely surrounded on two levels by balconies and verandas, which provide an uninterrupted two-level walkway around the pavilion, one 30 feet above the other, and provide an unobstructed view of the Exhibition from all sides. A similar 15-foot wide promenade surrounds the dome at the base, 130 feet above the exhibition grounds.

The visitor enters the building through a gigantic rotunda, 76 by 76 feet, whose ceiling is the soffit of the dome.
An electric fountain in the centre of this rotunda sprays artificially cooled water, which cools the surrounding areas to a pleasant temperature on hot days.

Passing through the rotunda, the visitor arrives at the State Hall in a wing at the southern end of the building. This auditorium is 50 by 75 feet, excluding the gallery, and 40 feet high, with seating for nearly 1,000 people. On the coffered ceiling, as well as on the panelled walls, the wall decorator has exercised his skill.

On this floor there are also exhibition rooms with viewing galleries surrounding them on all four sides.

The Governor's suite is on the first floor, while the south-west rooms are in the western connecting link. They are furnished with satin walnut wood produced in Missouri. The state room, or auditorium, is finished in the same material. The west terrace on the second floor houses the commissioner's rooms, with a comfortable lounge for the use of the commissioners. The East Terrace on the same floor contains the hospital, nursery and rest room for women, where they can have the services of nurses and a matron.