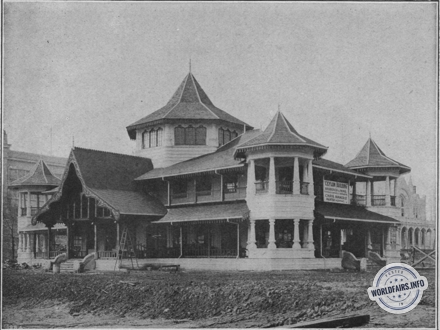 North of the Palace of Agriculture and near the great floral clock stands the magnificent Ceylon Pavilion, which cost $40,000, and is furnished in a sumptuous style with precious bric-a-brac from Asia.

The building is 100 by 84 feet. It has two floors and is surrounded by a gallery.

The interior has a courtyard, where Ceylon tea is served by natives dressed in picturesque costumes, with their hair coiled in large tortoiseshell combs.

The building is of Kandyan architecture, being a reproduction of an ancient Kandyan temple, one of the oldest of that architecture.
The panels on the walls are decorated with paintings depicting scenes from Ceylon. The building is lit by ancient Ceylon lamps as well as by modern incandescent lamps.

A sculptor was used to create six statues for the building, namely
- a ratemahatmaya in Kandyan costume,
-an Aratchi or chief, with long black coat, gold buttons and sandals;
- a Colombo Chetty, all in white, with large earrings,
-a Buddhist priest, fully clothed,
-and two Veddahs, one male and one female.

Elephants and elephant heads carved in ebony and ivory, boxes carved in ebony and tortoise shell, brass trays and lamps Porcupine quill boxes and working boxes; a complete tea set made of carved coconut shell, wooden cupboards, pots, carved panels such as those seen in the ruined cities of Ceylon, and Kandyan style paintings, depicting bizarre mythological scenes found on the walla of Buddhist and Hindu temples, are some of the interesting things to see inside.

Flower beds surround the building, where many species of Indian flowers have been transplanted.