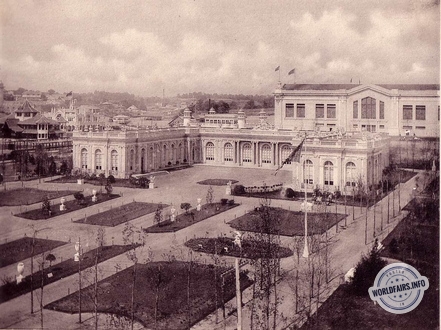 As soon as France had sent its official adhesion to the Exhibition, the United States granted it the most important site, 32,000 square metres, and the best situated for the construction of its National Palace.

It was decided that our Pavilion would be a faithful reproduction of the Grand Trianon of Versailles; the architects Umbdenstock, who had distinguished himself in 1900 with his Palais des Armées de Terre et de Mer, and Roger Bouvard fils drew up the plan and presided over the execution.

As it happens in these kinds of affairs, the expenses exceeded the forecasts. A sum of 150,000 francs had been allocated to the French Committee to ensure the construction of a National Palace. The participation of the Beaux-Arts had not been envisaged at that time, nor had it been thought that the importance of the French Section in Saint-Louis would oblige us to build a Palace worthy of our Exhibition and which would not be inferior to those of other nations.

There were only the bare walls. The interior design was entrusted to the Mobilier National, which organised the large Salon d'Honneur. The national manufactures of Sèvres, Gobelins and Beauvais decorated the salons with their marvellous tapestries. For the rest, the State resorted to private initiative. Several rooms were allocated for their Exhibitions to artistic works, which had to install and furnish them themselves, under government control. Three rooms were reserved for the City of Paris, to exhibit art objects and documents relating to the City: the Paris Chamber of Commerce also had its own exhibition. Our most famous artists had contributed their work and the ceilings of Besnard, Géo Roussel, Dubufe, Carrier Belleuse, etc. were admired.

Great houses of locksmiths and furniture makers offered their help and their objects free of charge. Spaces had been reserved for the exhibitions of some of the workers' associations that the Government had subsidised.

The offices of the Commissariat Général were installed in the Pavilion National.

They were laid out by the distinguished head gardener of the City of Paris. M. Vacherot. accompanied by 6 assistants obligingly lent for the occasion. The horticulturists had provided plants, shrubs and also their advice.

In these international jousts, the Pavilion is the nation, it is the tangible emblem of its genius. Our Pavilion was the most noticed and admired of the buildings erected by the various nations. Framed by its immense garden, marvellously designed, the Grand Trianon stood fresh and pink in a green setting, an image of the purity and delicacy of French taste. All the visitors hurried there with a curiosity mixed with a certain instinctive respect which led some of them to discover themselves on entering the House of France.

In a less imposing situation than the German Pavilion, blinded by the smoke from the factory chimneys of the Machinery Hall, crushed by the Eaux et Forets building, whose unfortunate silhouette formed a background against which it stood out from afar, our National Pavilion nonetheless personified the grace and spirit of France in one of its purest expressions of the end of the 17th century.

No need for its tricolour flag to indicate to any trained eye that this Pavilion, so graceful and so graceful, could only be a manifestation of French genius and taste.

The beautiful monumental gate from the workshops of M. Maison, the French parterres, so well designed and organised by M. Vacherot, the eminent chief gardener of the city of Paris, with their groups and statues, are of the best effect, and perfectly frame the Pavilion which was the joy of all lovers of Versailles and of our past glories*.
The white and pink marble pilasters would have benefited from being a little more old-fashioned, but the whole was certainly a great credit to Messrs G. Umbdenstock and Roger Bouvard, who were responsible for this reconstruction.
The Great Gallery of Honour.

As magnificent as these pieces are, and as admired as they were, it is regrettable that, as in the case of Sèvres, it was not thought necessary, in high places, to give a place to the modern products of the Gobelins and Beauvais factories, and that their Exhibitions
were placed in a Fine Arts room, mixed with a number of exhibitions by private manufacturers, which did not help to raise the prestige of our national manufactures in the eyes of visitors.

The ceiling of this Gallery, divided into three large panels, was executed by M. Geo Roussel.

Gilded wooden consoles and sheaths supporting busts, including that of the President of the Republic, completed the furnishings of this room, which was covered with tapestries known as "Savonnerie", and whose brocatelle hangings in a pretty blue colour highlighted the tapestries.

Salon of the Manufacture de Sèvres.

What a delightful sensation, full of charm and rest, one felt on entering the Salon reserved for the Manufacture nationale de Sèvres, when one arrived at the Pavilion de Trianon, after a long run through these immense Palaces, many of which seemed to have an unfinished decoration.

Here was an atmosphere of calm harmony, of taste and lightness. Pale blue moire walls, soft in tone, like a morning sky: all around, a frieze of yellow and cream arches connecting with the ceiling; a few ceramic cabochons adorned the arches; a plain beige carpet making the blue and yellow range of the walls sing.

The display cabinets, oh so simple! blond oak bases supporting the large glass panes set in green velvet with a base of delicious blue star, discreetly laminated with metal.

So much for the cage: as for the birds, worthy in every way of their aviary: delicious biscuits "Héro et Léandre", by Gascq: a peasant woman suckling her child, by Dalou, etc., etc.

More authoritative pens than ours will describe the beauty of stoneware, the technique of hard porcelain, the grand feu colours under glaze and over glaze, etc., but what we have to say is that the most important thing is to be able to see the whole picture, But what we have to praise here is the ingenious arrangement of the room, the delicious colouring, the charm and the bliss of coming here to refresh oneself after the daily grind; and we owe a debt of gratitude to the organiser, to the distinguished director of the works of art of the Manufacture de Sèvres, M. Sandier, the devoted collaborator of the museum. Sandier, the Administration's devoted collaborator, Mr. Baumgart, the expression of our sincere admiration and our deep gratitude for the delightful hours we spent in this Salon.

Although already known, (this Salon is, in fact, that of the Pavilion of Decorative Arts of the Exhibition of 1900, organized by Geo Hoentschel) one feels, to see it again, a feeling of sharp pleasure as with the sight of an already old friend. The rather simple ensemble does not exclude the decorative and architectural character.

Besnard's delightful panel, "L'Ile heureuse", perhaps even better displayed than in 1900, is still a feast for the eyes.

The hangings of the panels, designed by that delicate artist Karbowski, have also acquired a tone, even more discreet, and harmonise admirably with the softly toned woods.

The somewhat empty display cabinets, in our opinion, occupy the cut sections: in the middle of the room is the table and the few leather upholstered armchairs already seen in 1900.


Two Salons had been reserved for modern decorative artists and were entirely organised and decorated by the care and direction of Mr. Dubufe and the Société des artistes décorateurs, in agreement with the Comité français des Expositions à l'étranger and the Société d'Encouragement à l'art et à l'industrie.

While praising and admiring these Salons as they deserve, one may wonder whether they were in the right place and whether it would not have been preferable to exhibit them in the Decoration classes, whose brilliance they would have enhanced; whereas, placed in this reconstitution of a historic and ancient palace, they did not seem to be "the right thing in the right place.

The City of Paris occupied no less than three Salons in the right wing of the Palais national. The departments of Architecture, Public Roads, Metropolitan Railways, Public Assistance, etc. formed a technical Exhibition, most instructive, but leaving something to be desired from the artistic point of view after the Grande Galerie and the Salon de la Manufacture de Sèvres. The graphics of the Primary Education and the Exhibition of the Administration of the Mont-de-Piété could, it seems to us, have found a more appropriate setting.

Salon of the Paris Chamber of Commerce.

At the entrance to the left wing, a large Salon had been reserved for the Paris Chamber of Commerce, which had contributed to the expenses of the construction of the Palais national.

This Company had had the happy idea of calling upon several great furniture houses to decorate and furnish this room and to make it, as it were, the Salon and meeting place for the delegates, jurors and exhibitors who found there a meeting room after the toil of the long sessions in the Palaces where their mission called them.

The chalcography of the Louvre, with its beautiful proofs, and the Administration of Coins and Medals, with a collection of its most beautiful and interesting pieces, completed the Salons of the National Pavilion, which formed a corner of France and cast a reflection on the Exhibition of the elegant and spiritual art of the 17th and 18th centuries.