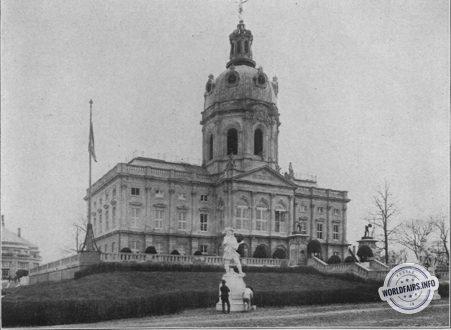 Well placed on high ground, dominating the Palaces, to the east of the Festival-Hall, the cascades and the great basin, it was reached by a series of terraces and gardens; statues seemed to guard its entrance, and the laurels in a ball, arranged on the terraces, gave it a quite royal appearance.

The building, a faithful reproduction of the Charlottenburg town hall of the seventeenth century, had been skilfully patinated and made up to give the impression of the original.

Two huge yellow and white banners, with double imperial eagles, hung from the roof and fluttered in the wind, completing the imposing and solemn appearance of the building on the outside.

Nothing of the Rauthaus had been omitted, and at the stroke of noon the bumblebee in the bell tower sent out its big bronze voice across the space so that no one should be unaware of it, and seemed to say "sit es nicht hier Deutschland!"

The public was admitted from 10 a.m. to noon and from 2 a.m. to 4 a.m. into the interior of the Palace, which in no way gave the impression of a temporary construction, but, on the contrary, of a permanent installation.

The visitor first entered a vestibule with tapestries on the walls, then the Brandenburg-Chamber, where jewels and crown jewels were displayed in showcases, and finally a long gallery, all decorated with oak and gold panelling, a faithful reproduction of that in the Royal Palace of Charlottenburg, and he left through a last room, the so-called "Hall of Heelings", so called because of the red damask hangings, all trimmed in gold.

The whole thing was heavy and pompous, but well suited to capture the imagination of Western visitors, and if, for the refined, the big German boot could not compete with Cinderella's coquettish shoe, the mass of the American public in St. Louis must have been impressed by the facsimile of the Royal Castle of Charlottenburg.