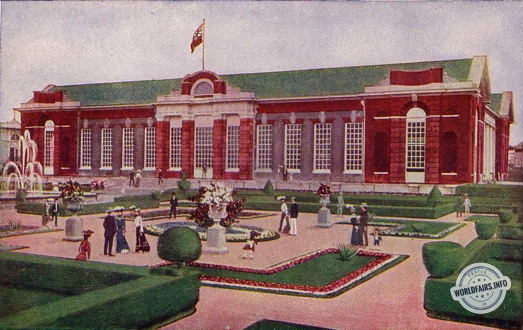 England, like France and Germany, preferred to reproduce an official building, and it was the Orangery of the Palais-Royal in Kensington, with part of the famous gardens of Kew, that it chose to give the Americans an idea of its national architecture.

A low, red-brick building, it had neither the elegance of the Trianon nor the imposing mass of Charlottenburg Palace.

The gardens, with their terraces, hedges and pruned boxwood, were not lacking in character, and the whole had the character of those old houses from the time of Queen Anne, at the beginning of the 18th century.

Part of this building was used as offices for the Royal Commission, and the public was only allowed to visit the few salons which were largely furnished with antique furniture of the Queen Anne, Sheraton, Adams, etc., period.